HomePoliticsDOJ plans to monitor elections in these 46 cities and counties to...
Politics 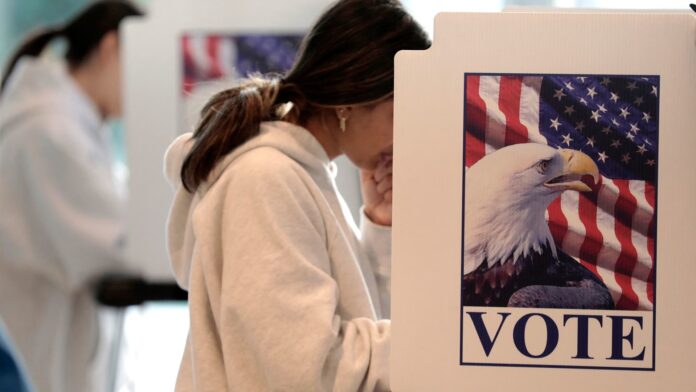 A neon voting sign is displayed on a truck during a midterm campaign election stop by Senator Raphael Warnock in Augusta, Georgia, U.S., November 5, 2022.

The Justice Department plans to monitor polls in two dozen states across the country to ensure no one intimidates voters or otherwise meddles with Tuesday’s midterm elections.

The department’s Civil Rights Division selected 64 jurisdictions in 24 states, including Alaska, Florida, Georgia and Nevada, for oversight in both the general election and early voting. The division routinely monitors elections in the field, starting in 1965 when Congress passed the Voting Rights Act.

DOJ monitored polls in 18 states and 44 cities and counties in 2020, by comparison.

Some of the most anticipated races of the election will occur among the states chosen for monitoring. Incumbent GOP Sen. Marco Rubio of Florida is up against Democratic Rep. Val Demings for U.S. Senate. Georgia voters will choose between Democratic Sen. Raphael Warnock and former President Donald Trump’s pick, Republican Herschel Walker. And Sen. Mark Kelly, D-Ariz., will defend his seat against venture capitalist Republican Blake Masters.

Personnel from the U.S. Attorneys’ Offices and the Office of Personnel Management will assist the DOJ Civil Rights Division in monitoring efforts and maintaining contact with state and local election officials.

Poll monitoring is part of the division’s mission to protect the civil right to vote under the Voting Rights Act, the Uniformed and Overseas Citizens Absentee Voting Act, the National Voter Registration Act, the Help America Vote Act, the Civil Rights Acts and the Americans with Disabilities Act, according to the DOJ.

Here are the states and jurisdictions where DOJ will monitor polls:

This year’s weaknesses could turn into next year’s strengths

Celsius CEO resigns in the middle of bankruptcy proceedings

U.S. hospitals report rise in severe strep A infections in kids after 15 deaths in U.K.