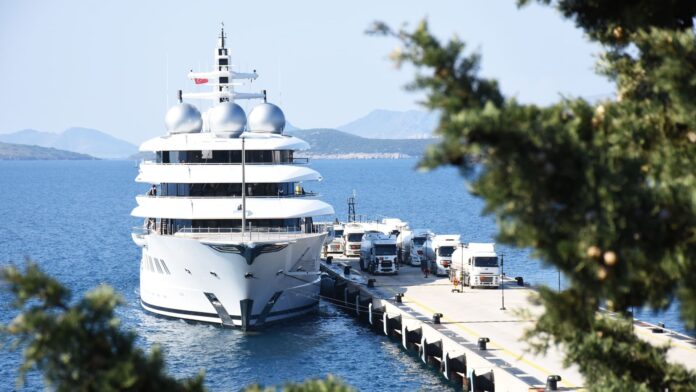 The 106m-long and 18m-high super luxury motor yacht Amadea, one of the largest yacht in the world is seen after anchored at pier in Pasatarlasi for bunkering with 9 fuel trucks, on February 18, 2020 in Bodrum district of Mugla province in Turkey.

The Department of Justice said Wednesday that the U.S. and its allies have frozen more than $30 billion of Russian oligarch assets and immobilized about $300 billion of Moscow’s central bank funds.

Global leaders believe their attempts to seize oligarchs’ luxury goods, including yachts worth hundreds of millions of dollars, will fuel continued political pressure on Russian President Vladimir Putin to end his invasion of Ukraine.

While the Justice Department deemed the task force’s first 100 days a success, it added that the work “is not yet complete.”

The REPO Task Force will over the next few months “continue to track Russian sanctioned assets and prevent sanctioned Russians from undermining the measures that REPO members have jointly imposed,” the DOJ said in a press release.

“We are seeking to maximize the impact of sanctions on designated persons and entities while guarding against spillover that affects global commodities markets and food supplies, which Russia has disrupted by choosing and continuing to wage war,” the department added.

U.S. law enforcement and Treasury officials in charge of sanctions say Russian yacht and yacht management companies are critical to Moscow’s indusial complex and a vast web of shell companies used by the country’s elites to secure ill-gotten profits.

Many of the sequestered ships boast luxury amenities and construction: Gold-and-marble bathrooms, decks made of rare woods and sized to accommodate helicopters, multiple cars and several swimming pools.

Since Putin began his invasion in February, the U.S. and other global powers have coalesced to support Kyiv through economic sanctions against Moscow and munition shipments to Ukrainian forces.

In a historic move, the Western military organization on Wednesday sent official membership invites to Sweden and Finland, both of which cited Putin’s territorial aggression for their moves to bulk up their own alliances.