HomeBusinessE-furniture seller Made suspends trading as scrambles for survival
Business

E-furniture seller Made suspends trading as scrambles for survival 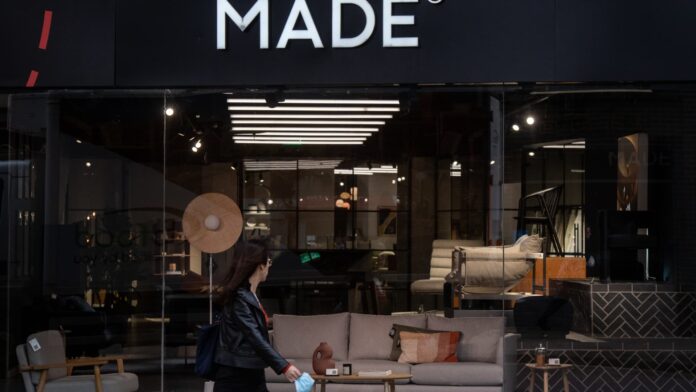 A view of a Made.com high street shop in central London on October 28, 2022 in London, England.

LONDON — Millennial-oriented furniture retailer Made.com on Tuesday suspended trading of its shares on the London Stock Exchange, after failing to agree a rescue deal before a November deadline.

The struggling company, which halted new customer orders on Oct. 26, also filed notice of its intention to appoint administrators from PricewaterhouseCoopers.

Made now has a 10-day period when it is protected from creditor action, during which it plans to engage in final talks in hopes of agreeing a full or partial sale before administrators are brought in.

In its notice, it said it had received proposals to acquire some or all of its trade, assets and brands, but could not guarantee these would complete.

It also said the board currently expected its shares to be canceled, with any remaining value distributed among shareholders.

Made listed on the London Stock Exchange in June 2021 at £1.99 per share, valuing the company at £775 million ($893 million), after it experienced bumper sales boosted by people revamping their homes during the coronavirus pandemic.

But its share price has been on a steady decline since its IPO, which accelerated amid the risk-off environment of 2022 that has pummeled tech stocks.

Its shares hit 20 pence in July, when the company cut its revenue and profit forecasts for the third time in a year, and at the time of suspension on Tuesday they were worth less than 1 pence.

Made.com became known for its range of Scandinavian, retro-inspired and brightly-colored furniture, with pieces such as its velvet sofas being shared widely on Instagram, helped by its use of influencer marketing.

However, customers also grumbled about long delivery times on some items, particularly as global supply chain issues intensified in 2021.

It reported £372 million revenue in 2021, up 50% on the previous year, but its EBITDA losses (earnings before interest, taxes, depreciation, and amortization) expanded from £2.9 million to £18.3 million.

It had also considered tapping shareholders for additional funding before announcing it was seeking a buyer or emergency investment in September, saying conditions were “not supportive at the current time of raising sufficient equity from public market investors.”

At the time, it also said it would look to lay off a number of its 700-strong workforce, which the Financial Times estimated would amount to 30%.

U.K. retail sales data for September showed shoppers cut back on purchases of items such as TVs, computers and furniture, but boosted sales of energy-efficient appliances like air fryers, which the British Retail Consortium attributed to plunging consumer confidence.

Despite a package of government support, energy bills will be higher for most households this winter, and year-on-year inflation is above 10%.

“The financial concerns that reared their heads as orders slowed were just one part of the group’s demise. The second is its inability to secure an outside rescue bid, which is a direct consequence of the current inflationary environment,” added Lund-Yates.

“It’s well known that discretionary consumer is an area of the economy which is going to suffer for some time yet, which is what has hindered Made’s ability to attract an offer,” she said.

Other online-first firms that listed in London in 2021 following pandemic growth have also suffered a drop in share value, including Deliveroo, down 55% this year, and retailer THG, down 71%.

Made was founded in 2010 by Ning Li, a Chinese-born, Paris-based entrepreneur who also founded vegan skincare brand Typology; and British investor Brent Hoberman, founder of Lastminute.com.

Hoberman, who has since left Made and is not on its board but remains a shareholder, told CNBC in an interview aired in October: “The company went public, there was Covid, which meant there was so much demand, and they were doing so well. They thought this was a structural shift, I guess, and was going to carry on.”

“Covid comes, recession comes, interest rates come, supply chain disruption that we all know about. So lots of external, really tough factors. So, they got unlucky,” he said.

“But they did raise £100 million pounds in the IPO … And they spent, it seems, most of that on buying [product] stock, which is a shift from the initial business model that I think was unfortunate.”

Hoberman said he believed Made had fallen into the trap of losing sight of what differentiated it after being sold, and was pressured by the market to continue high levels of growth.

“If your lead times are too long, you need to buy more stock and compress that, and so that got them in trouble,” he added.

Li stepped down as CEO in 2017 and said last week on LinkedIn: “12 years ago, my cofounders and I started a fledgling business on a shoestring in Notting Hill, with a simple idea of making high end design accessible to everyone. The idea became a £430m business in sales last year.”

“The mantra was simplicity – because it meant value for our customers and cost efficiencies for the business. From where I am sitting today I think the brand has lost sight of that focus in the recent years, and as a result, lost its strength.”