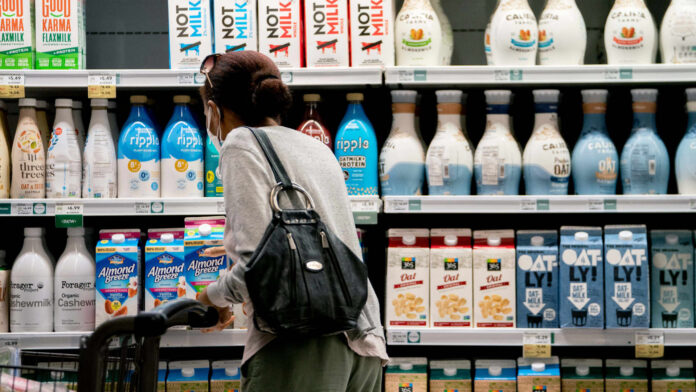 The U.S. economy contracted for the second straight quarter from April to June, hitting a widely accepted rule of thumb for a recession, the Bureau of Economic Analysis reported Thursday.

Gross domestic product fell 0.9% at an annualized pace for the period, according to the advance estimate. That follows a 1.6% decline in the first quarter and was worse than the Dow Jones estimate for a gain of 0.3%.

Officially, the National Bureau of Economic Research declares recessions and expansions, and likely won’t make a judgment on the period in question for months if not longer.

But a second straight negative GDP reading meets a long-held basic view of recession, despite the unusual circumstances of the decline and regardless of what the NBER decides. GDP is the broadest measure of the economy and encompasses the total level of goods and services produced during the period.

“We’re not in recession, but it’s clear the economy’s growth is slowing,” said Mark Zandi, chief economist at Moody’s Analytics. “The economy is close to stall speed, moving forward but barely.”

Markets reacted little to the news, with stocks slightly lower at the open. Government bond yields mostly declined, with the biggest drops at the shorter-duration end of the curve.

A separate report Thursday showed that layoffs remain elevated. Initial jobless claims totaled 256,000 for the week ended July 23, a decline of 5,000 from the upwardly revised level of the previous week but higher than the Dow Jones estimate of 249,000, according to the Labor Department.

The decline came from a broad swath of factors, including decreases in inventories, residential and nonresidential investment, and government spending at the federal, state and local levels. Gross private domestic investment tumbled 13.5% for the three-month period

Inventories, which helped boost GDP in 2021, were a drag on growth in the second quarter, subtracting 2 percentage points from the total.

Inflation was at the root of much of the economy’s troubles. The consumer price index rose 8.6% in the quarter, the fastest pace since Q4 of 1981. That resulted in a decline of inflation-adjusted after-tax personal income of 0.5%, while the personal saving rate was 5.2%, down from 5.6% in the first quarter.

“It really was to script,” Zandi said of the report. “The only encouraging thing was that inventories played such a large role. They won’t play the same role in the coming quarter. Hopefully, consumers keep spending and businesses keep investing and if they do we’ll avoid a recession.”

After posting its strongest gain since 1984 last year, the U.S. economy began to slow earlier this year due to a confluence of factors.

Supply chain issues, brought about initially by outsized demand for goods over services during the Covid pandemic, were at the core of the problem. That only intensified when Russia invaded Ukraine in February and, more recently, when China enacted strict shutdown measures to battle a burst of Covid cases.

The first-quarter numbers also were brought down by a swelling trade imbalance and a slowdown in inventories, which were responsible for much of the GDP gains in the second half of 2021.

Inflation began its steep ascent a year ago and then exploded in 2022, hitting its highest 12-month increase since 1981 in June. A slow-footed response by policymakers initially has resulted in some of the biggest interest rate increases the U.S. has ever seen.

The Federal Reserve over the past four months has raised benchmark borrowing rates by 2.25 percentage points. Back-to-back 0.75 percentage point increases in June and July mark the most aggressive two-month hikes since the Fed began using overnight rates as the primary policy tool in the early 1990s.

“Recent economic data may not paint a consistent picture, but a second consecutive negative quarter for GDP provides further evidence that, at best, economic momentum continued its marked slowdown,” said Jim Baird, chief investment officer at Plante Moran Financial Advisors. “The path for the Fed to raise interest rates without pushing the economy into recession has become exceptionally narrow. There’s a growing possibility that it may have already closed.”

Still, Fed Chairman Jerome Powell on Wednesday said he expects the increases to tamp down inflation but he does not see the economy in recession.

The economic slowdown has created a political headache for the White House as well. Following Thursday’s report, President Joe Biden said “it’s no surprise that the economy is slowing down as the Federal Reserve acts to bring down inflation.”

“But even as we face historic global challenges, we are on the right path and we will come through this transition stronger and more secure,” Biden added.

The feeling, though, on Wall Street is that the economy could well hit recession later this year or in 2023 but is not in one now.

That may not be enough to change public perception, however. A Morning Consult/Politico poll earlier this month indicated that 65% of registered voters, including 78% of Republicans, think the economy already is in a recession.