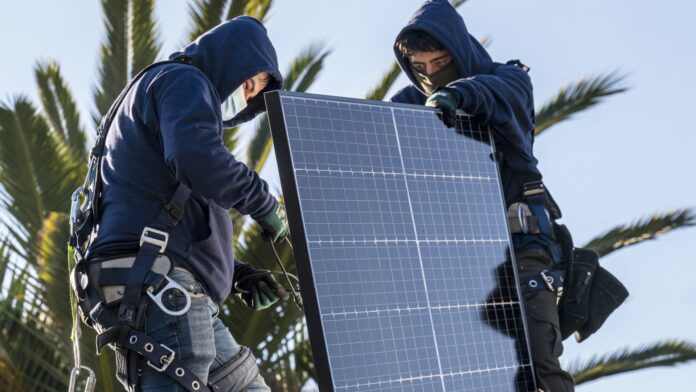 Contractors install SunRun solar panels on the roof of a home in San Jose, California, on Monday, Feb. 7, 2022.

Solar stocks jumped on Thursday after Senate Majority Leader Chuck Schumer, D-N.Y., and Sen. Joe Manchin, D-W.V., said they’ve reached a deal on what would be the most ambitious climate spending package in U.S. history.

“This is an 11th hour reprieve for climate action and clean energy jobs, and America’s biggest legislative moment for climate and energy policy,” she added.

A strong start to earnings season also lifted the group. Sunnova shares jumped on Wednesday evening after the company topped revenue expectations during the second quarter.

Enphase meantime surged nearly 18% on Wednesday, making it the top-performing S&P 500 component. The company posted record revenue during the second quarter, boosted by strong demand out of Europe.

The announcement Wednesday evening from lawmakers comes after Sen. Manchin said earlier this month that he would oppose the climate spending in the reconciliation package, which sent solar stocks tumbling.

The bill, which the full Senate will consider next week, includes a 10-year extension of clean energy tax incentives. The Investment Tax Credit, which has been key to the industry’s growth and has typically garnered bipartisan support, was last extended in 2020. It was set to decrease at the end of this year.

The package would also include incentives for domestic manufacturing. Shares of panel makers First Solar and Maxeon Solar both gained 19% Thursday.

Provisions for electric vehicles, hydrogen and nuclear power are also included in the proposed funding.