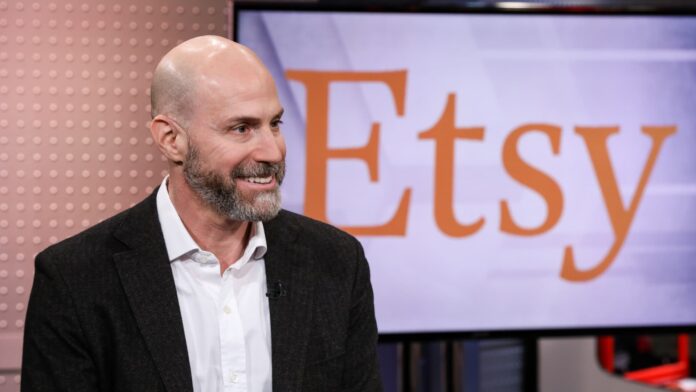 Etsy shares surged as much as 10% in extended trading Wednesday after the online marketplace’s third-quarter revenue and earnings outperformed expectations. The company also posted upbeat guidance for the current period.

For the fourth quarter, Etsy said it expects to report revenue between $700 million and $780 million, and gross merchandise sales of $3.6 billion to $4 billion. Wall Street was projecting fourth-quarter sales of $743 million, and GMS of $3.9 billion, according to StreetAccount.

Etsy reported a net loss of $963.1 million during the third quarter that included a goodwill impairment charge of $1.04 billion to write down the value of its acquisitions of fashion resale app Depop and Brazil-based marketplace Elo7, which it purchased for $1.62 billion and $217 million, respectively. Excluding the impairment charge, Etsy earnings were 58 cents per share, adjusted.

Third-quarter revenue grew 11.7% from the year-ago period, boosted by Etsy’s transaction fee hike. The company announced last April it would raise the transaction fees it charges sellers to 6.5% from 5%, which spurred backlash from merchants, including a weeklong strike.

Investors have been closely watching e-commerce companies’ forecasts for the fourth quarter as a barometer for inflation-weary consumers’ willingness to spend during the holidays. The latest warning came from Amazon last week when it guided for fourth-quarter revenue growth of 2% to 8%, missing Wall Street’s expectations.

Analysts are expecting a lackluster holiday shopping season, with online sales in November and December projected to grow just 2.5% from the prior year, according to Adobe.

“We don’t know whether consumers will spend more or less on gift giving, or whether they’ll do more shopping online or in the mall,” Etsy CEO Josh Silverman said in the earnings release. “But the good news is our business – with differentiated inventory across our House of Brands and a variable cost model – doesn’t depend upon us taking big bets on these questions in the same ways most other retailers or e-tailers must.”

“So we are doing all we can to help make sure Etsy sellers have the best holiday season they can – particularly in the face of continued economic uncertainty,” he added.

A must buy, even if you have the older Pros