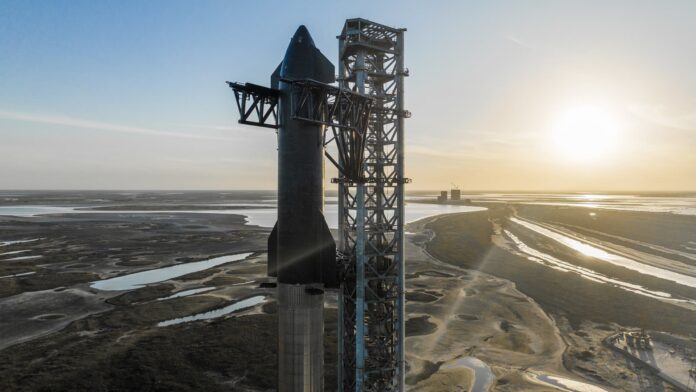 A Starship prototype stands on the company’s launchpad in Boca Chica, Texas on March 16, 2022.

The Federal Aviation Administration on Monday said it will require Elon Musk’s SpaceX to make dozens of environmental adjustments in order to conduct further Starship flight tests and begin operational launches from its facility in Boca Chica, Texas.

SpaceX will be required to take more than 75 actions to mitigate environmental impacts before the company can receive a launch license for the site, the FAA said in a press release. The mitigations include protections for water resources, limits to noise levels, and biohazard materials control, among others.

SpaceX did not immediately responds to CNBC’s request for comment, but in a tweet shared a link to the FAA’s website with a brief message: “One step closer to the first orbital flight test of Starship.”

The company is developing its nearly 400-foot-tall, reusable Starship rocket with the goal of carrying cargo and groups of people beyond Earth. The rocket and its Super Heavy booster are powered by SpaceX’s Raptor series of engines.

The FAA began a review of the program in November 2020 after the company began to build up its infrastructure and operations on the coast of the Gulf of Mexico, near the city of Brownsville, Texas.

The agency delayed its final assessment five times over the past six months as it reviewed input on the program. Its ruling Monday of a Mitigated Finding of No Significant Impact is still a partial win for SpaceX, saving the company from a more lengthy review of its operations, known as an Environmental Impact Statement.

The FAA released two key documents on Monday: A summary of the environmental assessment and a detailed rundown of the actions the company must take.

As part of the FAA’s review, a report earlier this year from the U.S. Fish and Wildlife Service obtained by CNBC found a correlation between SpaceX activity in the area and recent declines in the local population of the piping plover, an endangered bird species. However, the FWS suggested minimal spending or conservation commitments from SpaceX.

SpaceX has completed multiple high-altitude flight tests with Starship prototypes, but its has yet to reach space following development and regulatory delays. In February, SpaceX CEO Elon Musk gave a presentation on Starship at the company’s Starbase facility in Texas, outlining the path forward and obstacles for the rocket’s testing.

Waiting to confront Texas school shooter was ‘the wrong decision,’ police admit along with string of other failures