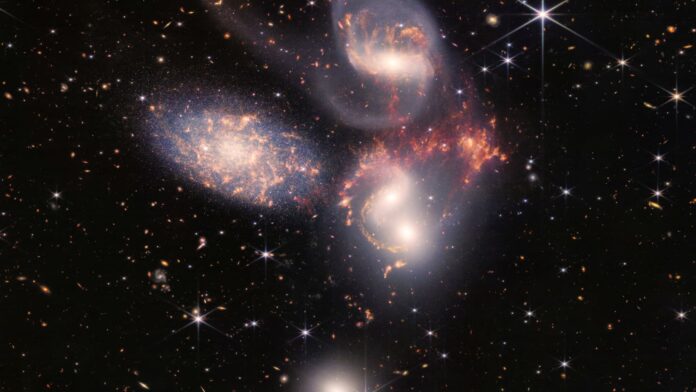 Two side-by-side deep field images from the MIRI and NIRCam instruments of NASA’s James Webb Space Telescope, a revolutionary apparatus designed to peer through the cosmos to the dawn of the universe, show composites made from images at Mid-Infrared (L) &amp; Near-Infrared (R) and released July 12, 2022.

A new era of astronomy has begun.

NASA on Tuesday released a full batch of images and data from the James Webb Space Telescope, providing a tantalizing first look at the cosmic mysteries that could be untangled in the years ahead by humanity’s largest and most powerful space observatory.

Among the newly released images are breathtaking views of a distant galaxy group called Stephan’s Quintet that was discovered in 1877, a stellar nursery called the Carina Nebula that plays host to many stars that are several times larger than the sun, and the Southern Ring Nebula, a huge expanding shell of gas around a dying star.

Stephan’s Quintet, a collection of five galaxies, as seen by MIRI from NASA’s James Webb Space Telescope, a revolutionary apparatus designed to peer through the cosmos to the dawn of the universe and released July 12, 2022.

“Every image is a new discovery and each will give humanity a view of the universe that we’ve never seen before,” NASA Administrator Bill Nelson said during an event held at the Goddard Space Flight Center to introduce the images.

The long-awaited release of the Webb telescope’s first images comes after NASA and the White House gave the public a sneak peek a day early, unveiling a stunning view captured of a patch of sky overflowing with bright galaxies.

The so-called “deep field view” showed massive clusters of galaxies in the foreground that are magnifying and distorting light from fainter and much more distant celestial objects behind them.

Two side-by-side images show observations of the Southern Ring Nebula in near-infrared light, at left, and mid-infrared light, at right, from NASA’s James Webb Space Telescope, a revolutionary apparatus designed to peer through the cosmos to the dawn of the universe and released July 12, 2022. I

That image, along with the full series released Tuesday by the space agency, hint at the sheer power and unparalleled capabilities of the $10 billion-Webb telescope. Scientists have said the observatory, which will be able to see deeper into space and in greater detail than any telescope that has come before it, could revolutionize human understanding of the universe.

This week’s release included the Webb telescope’s first spectrum of an exoplanet, showing light emitted at different wavelengths from WASP-96b, a planet outside our solar system that was discovered in 2014. WASP-96b, located more than 1,000 light-years away from Earth, has roughly half the mass of Jupiter and is primarily made up of gas, according to NASA.

The “Cosmic Cliffs” of the Carina Nebula is seen in an image divided horizontally by an undulating line between a cloudscape forming a nebula along the bottom portion and a comparatively clear upper portion, with data from NASA’s James Webb Space Telescope, a revolutionary apparatus designed to peer through the cosmos to the dawn of the universe and released July 12, 2022. Speckled across both portions is a starfield, showing innumerable stars of many sizes.

While WASP-96b is too hot and located too close to its parent star to be considered habitable, Webb’s spectrum revealed the presence of water vapor in the planet’s atmosphere.

Webb’s observations of exoplanets, including with instruments sensitive enough to study the chemical fingerprints of their atmospheres, could help guide the search for potential life beyond Earth.

The Webb telescope, a collaboration among NASA, the European Space Agency and the Canadian Space Agency, launched into space Dec. 25, 2021. After spending more than six months testing and configuring the spacecraft’s various instruments, NASA officials said the observatory’s science operations are now ready to begin in earnest.

The spacecraft, which is the size of a tennis court, is equipped with infrared “eyes” that can pierce through dust and gas that might otherwise make some stars, galaxies and celestial targets undetectable. As such, the telescope is expected to provide first-of-its-kind infrared views of the universe, and capture some never-before-seen cosmic objects.

A group of five galaxies that appear close to each other in the sky: two in the middle, one toward the top, one to the upper left, and one toward the bottom are seen in a mosaic or composite of near and mid-infrared data from NASA’s James Webb Space Telescope, a revolutionary apparatus designed to peer through the cosmos to the dawn of the universe and released July 12, 2022.

Telescopes like Webb can essentially peer back into the universe’s history because it takes time for light to travel through space. This means that light detected by Webb from the most distant galaxies in the cosmos provides insight into the universe as it was billions of years ago.

Billed as the successor to the prolific Hubble Space Telescope, the Webb observatory is designed to study the earliest stars and galaxies in the universe. Researchers have said that Webb could unlock mysteries from as far back as 100 million years after the Big Bang — observations that could help astronomers understand how the modern universe came to be.

fiscal rules to be updated and the markets will be watching

Seagate is not for this market

These stocks are insulated from a recession, Morgan Stanley says