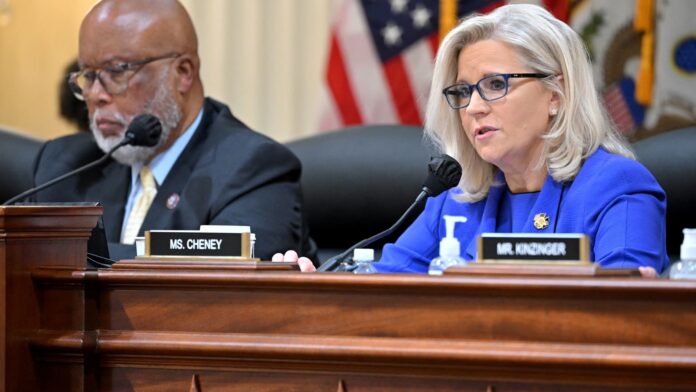 US Representative Liz Cheney (R) speaks flanked by US Representative Bennie Thompson, chairman of the House committee investigating the Capitol riot, during a House Select Committee hearing to Investigate the January 6th Attack on the US Capitol, in the Cannon House Office Building on Capitol Hill in Washington, DC on June 9, 2022.

About 20 million people in the United States tuned in to the first hearing on the House’s investigation into the Jan. 6 attack on the Capitol Thursday night, according to preliminary data released by Nielsen on Friday.

Nielsen noted that while coverage varied, there were 12 networks that carried the hearing live between 8 p.m. and 10 p.m. ET.

Nearly 5 million people watched the hearing on ABC, while NBC had about 3.6 million viewers and CBS brought in 3.4 million, according to TVLine.

More than 4 million people viewed the hearing on MSNBC and about 2.6 million watched on CNN, TVLine reported.

Fox News, which didn’t cover the two-hour hearing, averaged about 3 million viewers during that period, TVLine said. That’s about the size of their regular primetime audience during the week, according to a recent report from Deadline.

In comparison to the audience Thursday night, President Joe Biden’s State of the Union address in early March drew 38 million viewers, while the first day of former President Donald Trump’s second impeachment trial in the Senate in February 2021 brought in 11 million viewers.

The Jan. 6 committee’s other hearings planned for June will either take place in primetime again or during the day. The two slated for next week, on Monday and Wednesday, are expected to begin at 10 a.m. ET.

Sony raises price of PlayStation 5 console due to soaring inflation