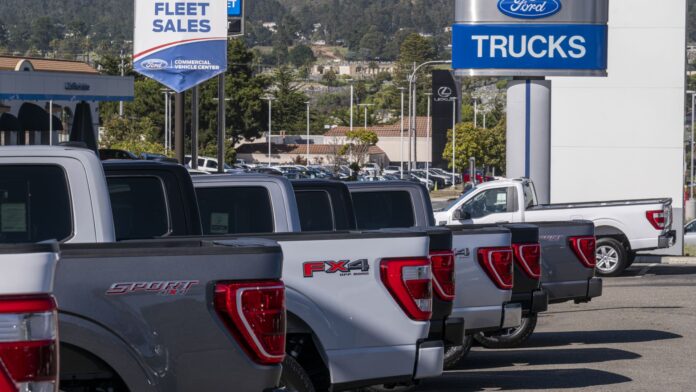 The Detroit automaker on Wednesday reported sales of 158,327 new vehicles in October, which was off from nearly 176,000 units sold during the same month a year earlier. It was the second-straight month of year-over-year declines after two months of double-digit increases over subdued sales constrained by semiconductor shortages.

Ford has experienced unique supply chain issues lately, including sourcing of its blue oval badges for highly profitable pickup trucks and SUVs. The automaker had roughly 40,000 vehicles awaiting parts to end the third quarter. It said last week it expects to complete and ship those vehicles to dealers by the end of the year.

Ford said orders for 2023 model-year vehicles totaled 255,000. Roughly half of those were retail sales from previously placed orders, according to the company.

Sales of Ford’s profitable F-Series pickups were off by 17.4% last month from October 2021, contributing to a roughly 13% year-to-date decline heading into the last two months of the year. The company sold 11,196 models of its all-electric F-150 Lightning pickup through October, including 2,436 vehicles last month.

Ford’s 2022 all-electric vehicle sales totaled roughly 47,500 units through October, accounting for about 3% of the automaker’s sales. A majority of those sales were Mustang Mach-E crossovers, which have increased 44% compared with last year to more than 31,000 units.

Year-to-date sales of all of Ford’s vehicles, including its luxury Lincoln brand, totaled 1.54 million units through October, a 2.2% decrease from a year ago.

Ford is among a handful of automakers to report new monthly vehicle sales. Others — such as General Motors and Stellantis, formerly Fiat Chrysler — report sales only quarterly.

Ford’s October sales come a week after the company recorded a net loss of $827 million during the third quarter, weighed down by supply chain problems and costs related to disbanding its autonomous vehicle unit Argo AI.

Higher interest rates are here, and that makes these vanilla investments compelling