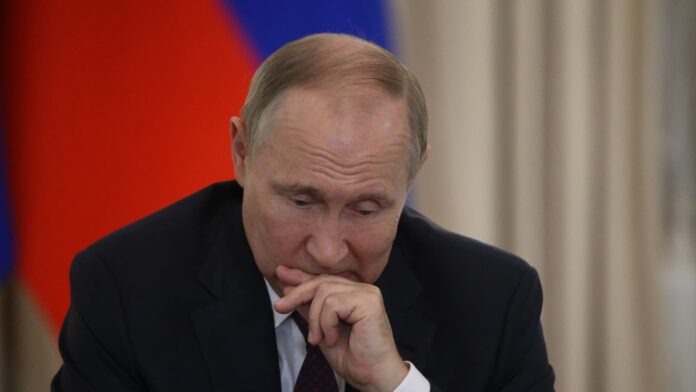 Russia summoned the British ambassador on Thursday over Moscow’s claim that British navy personnel were involved in a Ukrainian drone attack on Russia’s Black Sea Fleet in Crimea.

Ambassador Deborah Bronnert arrived at the foreign ministry shortly after 1030 local time (0730 GMT) as a small crowd chanted anti-British slogans and held up placards reading “Britain is a terrorist state.”

Bronnert was inside the ministry for around 30 minutes, a Reuters journalist at the scene said. There was no immediate statement from either Russia or Britain on the details of what was discussed.

Russian President Vladimir Putin (C) and the British ambassador to Russia, Deborah Jane Bronnert (L) in the Kremlin in Moscow on February 5, 2020.

Russian foreign ministry spokeswoman Maria Zakharova said on Wednesday the ambassador was to be summoned over Saturday’s drone attack on Crimea, which Russia annexed from Ukraine in 2014.

Russia casts Britain as a particularly perfidious Western power which President Vladimir Putin says is plotting to destroy Russia and carve up its vast natural resources.

After Russia invaded Ukraine, Britain, along with the United States and the European Union, imposed some of the most severe sanctions in history and supplied weapons to help Ukraine.

Russia’s defence ministry said that British navy personnel blew up the Nord Stream gas pipelines, a claim that London said was false and designed to distract from Russian military failures in Ukraine.

This photo taken on Sept. 11, 2022, shows a security person standing in front of the Zaporizhzhia Nuclear Power Plant in Enerhodar, Zaporizhzhia, amid the Ukraine war.

In a post on Telegram, Energoatom said that shelling by Russian forces on Wednesday had damaged the last two high-voltage lines connecting the plant to the Ukrainian grid, and that Russia wanted to connect the plant to the Russian grid.

“At 11:04 pm [Wednesday], the power plant went to full black-out mode. All 20 diesel generators started operating,” Energoatom said. Although the plant’s six reactors are shut down, power is still needed for cooling and safety operations.

Energoatom said it had 15 days’ worth of fuel to operate the diesel generators while the plant is in blackout mode.

“The countdown has begun. Due to the occupation of the plant and the interference of Rosatom [Russia’s state nuclear energy company] representatives in its operation, the opportunities of the Ukrainian side to maintain the ZNPP in a safe mode are significantly limited,” it said.

The Zaporizhzhia NPP was occupied by Russian forces earlier this year, and has been a pawn in the war, with both sides accusing each other of shelling and endangering the plant, which is Europe’s largest nuclear power plant. International atomic energy experts have warned the potential for a disaster is high given active hostilities around and near the plant.

First Lady of Ukraine Olena Zelenska during at opening night of Web Summit 2022 in Lisbon, Portugal on November 1, 2022.

Ukrainian first lady Olena Zelenska on Wednesday called on Western leaders to offer more military support as the country continues to defend itself against Russia’s onslaught.

Zelenska urged the international community not to grow fatigued by the war, saying allied countries must fight the aggressor together.

“I understand that these are outside the duties of first ladies, but we are already outside the normal protocols because of the war,” Zelenska told CNBC’s Karen Tso, according to a translation.

Russia’s monthly economic downturn continued in September with gross domestic product declining by 5% year on year, according to the latest data from Russia’s Ministry of Economic Development, reported by state news agency Interfax.

The decline in economic output in September followed a 4% year-on-year decline in August, and a 4.3% decline in July.

According to the ministry, the decline in Russia’s GDP in the third quarter of 2022 amounted to 4.4% in annual terms, after a decline of 4.1% in the second quarter and growth of 3.5% in the first quarter.

Russia has been laboring under the weight of international sanctions on key sectors, businesses and individuals for months following its invasion of Ukraine, although it was subject to other economic sanctions before the war for other reasons, including alleged U.S. election interference, cyberattacks and its annexation of Crimea in 2014.

Russian consumers are facing considerable living costs as inflation remains high, with the rate at 12.9% in October, although it has been gradually declining (inflation stood at 14.3% in August) after the central bank raised interest rates to tackle price rises.

Russia has insisted that its economy is able to circumnavigate the challenges posed by sanctions and, as a major oil and gas exporter, has been able to maintain revenue streams from the exports of those commodities to economic partners in Asia, particularly India and China.

Still, Western agencies like the Organisation for Economic Cooperation and Development, IMF and World Bank expect Russia’s economic decline to be significant this year. Between them, they have forecast that Russia’s GDP could drop by at least 5.5% in the best-case scenario to almost 9% in the worst-case scenario.

Russian President Vladimir Putin said that despite Russia’s return to the Black Sea Grain Initiative, it “reserves the right to withdraw” from the deal if Ukrainian guarantees are not met.

Russia suspended its participation in the grain deal over the weekend, after claiming a Ukrainian drone attacked its Black Sea fleet in Crimea. Ukraine did not claim responsibility for the attack, which some Ukrainian officials blamed on Russian soldiers mishandling their own weapons.

“We demanded assurances and guarantees from the Ukrainian side that nothing like this will happen in the future,” Putin said in a meeting with permanent members of the Russian Security Council.

“I have given instructions to the Ministry of Defense to resume our full participation in this work,” he added. “At the same time, Russia reserves the right to withdraw from these agreements if these guarantees are violated by Ukraine.”

Early in the war, Russia relied on its Black Sea fleet to launch missiles deep into Ukraine, but the fleet drew back into a defensive position after a series of embarrassing attacks this spring by Ukrainian forces.

Before last weekend’s drone attack, analysts noted that Russia already appeared to be laying rhetorical groundwork for withdrawing from the deal, before reversing course this week.

The grain is critical to feeding populations in some of the world’s poorest countries, and a return to a full blockade could have brought famine to millions in Asia and the Middle East.

Putin also committed to delivering the “entire volume” of grain that has been delivered from Ukraine to the poorest countries “free of charge,” if Russia withdraws from the deal in the future.

The bulk carrier Asl Tia is shown transiting Turkey’s Bosphorus Strait, carrying 39,000 metric tons of sunflower meal from Ukraine on Wednesday. The vessel is on its way to China.

Russia on Tuesday rejoined a deal that gives safe passage to grain shipments from Ukraine, which Russia invaded in February. Russia has severely disrupted Ukraine’s agricultural output and prior to the deal was blockading outbound vessels. The deal was brokered by Turkey and the UN.

The Kremlin said it was leaving the deal over the weekend after Ukraine attacked warships from its Black Sea Fleet. But loaded freighters sailed anyway, and Moscow rejoined the agreement on Wednesday.

Ukraine is one of the world’s largest grain exporters, with nations in Asia, Africa and beyond dependent on its food shipments.

Turkish President Tayyip Erdogan addresses members of his ruling AK Party (AKP) during a meeting at the parliament in Ankara, Turkey May 18, 2022. Murat Cetinmuhurdar/Presidential Press Office/Handout via REUTERS THIS IMAGE HAS BEEN SUPPLIED BY A THIRD PARTY. NO RESALES. NO ARCHIVES. MANDATORY CREDIT

“President Erdogan stated that on the basis of an understanding that will lead to the full restoration of Ukraine’s territorial integrity and sovereignty, diplomatic efforts should be increased to end the war with a just solution,” reads a post from the Turkish president’s official Twitter account.

Erdogan also emphasized the importance of Ukrainian and Russian grain exports, underscoring the importance of the Black Sea Grain Initiative. In the same call, Zelenskyy thanked Erdogan for his “active participation in preserving the ‘grain deal,'” in a Telegram post.

Turkey played a crucial role in both brokering the United Nations-backed deal in July and in ending Russia’s suspension of the deal this week.