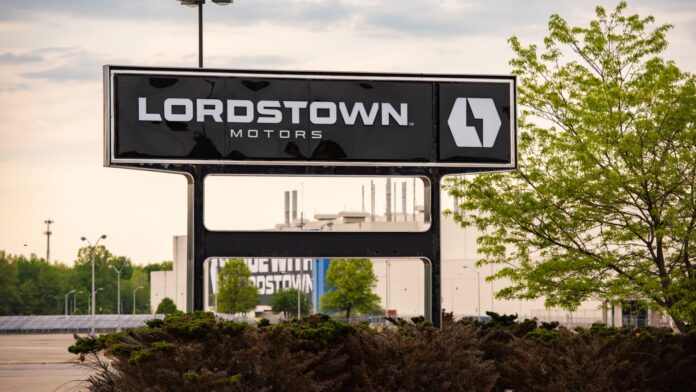 Signage outside Lordstown Motors Corp. headquarters in Lordstown, Ohio, on Saturday, May 15, 2021.

Struggling electric truck startup Lordstown Motors still plans to deliver the first examples of its Endurance pickup truck before the end of the year, the company said Tuesday, a day after it announced a new investment from Taiwanese contract manufacturer Foxconn.

Lordstown said that it is now building the Endurance at “a very slow rate” while it works to build out its assembly line and awaits final regulatory approval to sell the trucks. The company now expects to build about 30 pickups for sale by year-end, and to complete the remainder of the first batch of 500 trucks by the end of June 2023.

Lordstown said in late September that it hoped to build 50 trucks by year-end. To date, it has completed 12 trucks.

Lordstown’s shares were up over 15% in premarket trading on Tuesday.

The company said late on Monday that Foxconn, which already owns a stake in Lordstown and bought its Ohio factory for $230 million in May, will invest an additional $170 million in three phases, with the first $52.7 million due later this month. Once those investments are completed, Foxconn will own about 18% of Lordstown and will have the right to designate two members of its board of directors.

The investment helps address a lack of capital that has hindered Lordstown’s efforts to get the Endurance into production.

Lordstown previously told investors that its first batch of Endurance pickups will be limited to a maximum of 500 vehicles because the cost of building a pickup is currently “materially higher” than the company’s expected selling price. Additional investments in manufacturing tooling would bring the cost down, but CEO Edward Hightower has deferred those investments to preserve cash.

Lordstown said on Tuesday that it is actively seeking an automaker partner to help scale up production of the Endurance.

The updates came as part of Lordstown’s third-quarter earnings report. Lordstown, which doesn’t yet record revenue, reported a net loss of $154.4 million, or 73 cents a share, including nearly $75 million in non-cash accounting charges related to the sale of its factory to Foxconn.

The company had $204 million in cash remaining as of quarter-end.