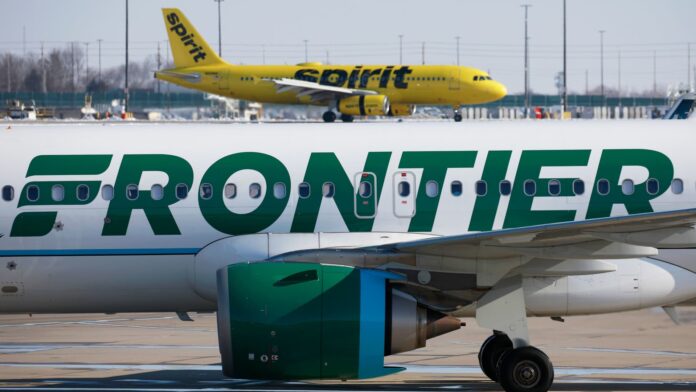 Frontier Airlines has asked Spirit Airlines to further delay a shareholder vote on their planned merger to drum up more support from investors amid a bidding war with rival suitor JetBlue Airways.

In a letter sent to Spirit’s CEO dated Sunday, Frontier CEO Barry Biffle called the airline’s recently sweetened cash-and-stock offer to combine with the fellow budget carrier its “last, best and final” and raised concerns about a lack of shareholder support for the deal, first announced in February.

Spirit has repeatedly delayed a shareholder vote on the Frontier tie-up to continue talks with both airlines and gather votes. JetBlue is offering a $3.7 billion all-cash takeover. Frontier’s CEO said in his letter, “We still remain very far from obtaining approval from Spirit stockholders.”

CNBC last week reported that Spirit didn’t appear to have enough votes to support the merger, according to people familiar with the matter.

“As has been the case throughout this process, we remain committed to this transaction,” Frontier’s Biffle wrote. “However, should the Spirit Board of Directors conclude that it would instead desire to pursue an alternative transaction with JetBlue, we would appreciate being advised of that determination.”

Shares of Frontier and Spirit were each down about 1.5% in mid-morning trading Monday after the letter was made public in a securities filing. Shares of JetBlue were down about 2.5%.

A merger between Spirit and Frontier would create a budget-carrier behemoth, though either combination of airlines would create the fifth-largest carrier in the U.S. behind American, Delta, United and Southwest.

Spirit has repeatedly rebuffed JetBlue’s advances, arguing a takeover by that airline would be unlikely to win approval from the Justice Department.

Frontier made the same argument in its letter Sunday, noting a recent determination by the Department of Transportation that granted Spirit 16 additional slots at Newark Liberty International Airport and determined the airline had a competitive advantage over JetBlue and other applicants.

“The path to regulatory approval of a JetBlue-Spirit combination seems more impossible by the day,” Frontier said in its letter.

Representatives for Spirit and JetBlue didn’t immediately comment on Monday.