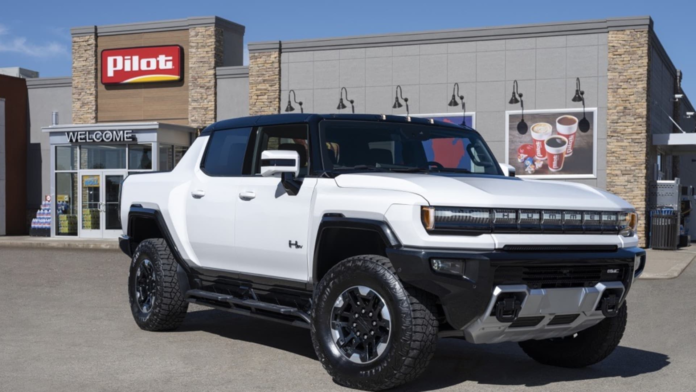 General Motors is building out a new network of EV fast chargers in partnership with Pilot Co., owner of the Pilot and Flying J highway travel centers, and EV charging network EVgo.

The companies will install a total of 2,000 fast chargers at 500 of Pilot’s locations along American highways at intervals of approximately 50 miles, they said Thursday. The partners expect to have a significant portion of those chargers installed and operating by the end of 2023.

The deal, which is expected to benefit from grants made available by the U.S. government, is part of a broader $750 million effort by GM to build out an accessible fast-charging network as it gears up to launch a series of new electric vehicles over the next few years.

GM to partner with EVgo and Pilot to add EV chargers to stations.

GM and EVgo previously announced a plan to install an additional 3,250 fast chargers in and around U.S. cities and suburbs by the end of 2025. GM is also working with its dealers in the U.S. and Canada to install up to 40,000 chargers in the dealers’ communities, an effort that is focused on “underserved rural and urban areas,” the company has said.

Studies have shown that drivers’ concerns about access to chargers along highways is a limiting factor in EV adoption.

“We are committed to an all-electric, zero-emissions future, and ensuring that the right charging infrastructure is in place is a key piece of the puzzle,” said GM CEO Mary Barra in a statement. “With travel centers across North America, Pilot Company is an ideal collaborator to reach a broad audience of EV drivers.”