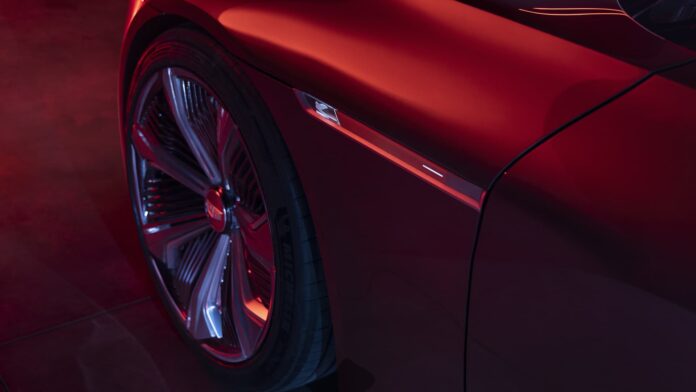 Front driver’s side view of the Celestiq show car, which GM is expected to unveil in late-July.

DETROIT – General Motors on Wednesday said it is investing $81 million at its global design and technology campus in suburban Detroit to hand build the upcoming Cadillac Celestiq – a new electric flagship car for the brand that will be produced in limited quantities.

The decision marks the first time GM will build a vehicle for commercial sales at its massive tech campus in Warren, Michigan. It also marks a pivot for Cadillac to offer a hand-built car, which is typically reserved for high-end sports cars and uber-luxury vehicles such as Bentley’s exclusive models, as GM pushes to revive the quintessential American brand into a tech-savvy EV carmaker capable of challenging Tesla.

GM is scheduled to officially unveil the car next month. Only hundreds are expected to be produced each year and cost $200,000 or more per car, Cadillac President Steve Carlisle told The Wall Street journal in 2020.

The vehicle will be based on GM’s new Ultium electric vehicle platform, which was first used on the GMC Hummer EV. The platform is meant to be modular and underpin GM’s newest EVs, including 30 new models by 2025.

In a release Wednesday, GM said the investment will be used to purchase and install equipment to hand-build the Celestiq and for campus renovation work that is already underway. The company reconfirmed that the Celestiq roof is expected to be one of the first to feature a four-quadrant, suspended-particle-device smart glass that lets each occupant of the car set their own level of roof transparency.

The automaker also said the vehicle will feature a new interior screen display that spans the width of the vehicle  and include more than 100 3D printed parts.

Although machinery is used in making hand-built vehicles, it’s largely controlled by humans. That compares to a typical vehicle, which is largely produced on an assembly line using hundreds of robots alongside assembly workers.