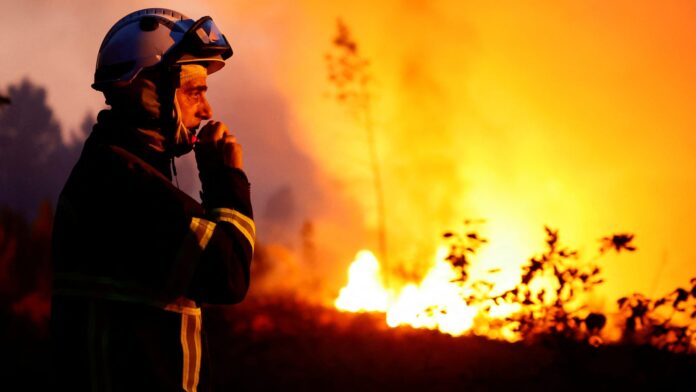 A firefighter works to contain a tactical fire in Louchats, as wildfires continue to spread in the Gironde region of southwestern France, July 17, 2022.

“Half of humanity is in the danger zone from floods, droughts, extreme storms and wildfires. No nation is immune. Yet we continue to feed our fossil fuel addiction,” Guterres said in a video message to the assembled leaders on Monday.

“What troubles me most is that, in facing this global crisis, we are failing to work together as a multilateral community. Nations continue to play the blame game instead of taking responsibility for our collective future. We cannot continue this way,” Guterres said.

“We have a choice. Collective action or collective suicide. It is in our hands.”

Antonio Guterres, Secretary General of the United Nations, speaks to reporters after a meeting with British Prime Minister Boris Johnson for climate change discussions during the 76th Session of the U.N. General Assembly in New York, at United Nations headquarters in New York, September 20, 2021.

The leader of the United Nations laid out a multipronged approach for responding to climate change right now. Countries need to reduce their emissions by eliminating coal and moving toward emissions-free energy sources, like renewable energy. Second, there has to be more focus on adapting safely to the risks.

On this front, Guterres said there should be a system in place to respond to climate loss and damage that is already affecting the poorest and most vulnerable.

A firefighter creates a tactical fire in Louchats, as wildfires continue to spread in the Gironde region of southwestern France, July 17, 2022.

“While there is a clear pattern of an ‘atmospheric wave’ with alternating warm (redder) and cool (bluer) values in different locations, this large area of extreme (and record-breaking) heat is another clear indicator that emissions of greenhouse gases by human activity are causing weather extremes that impact our living conditions,” Steven Pawson, chief of the Global Modeling and Assimilation Office at NASA Goddard Space Flight Center, said in a written statement published alongside the map.

“Such extreme heat has direct impacts on human health, as well as having other consequences, including these fires that are occurring now in Europe and Africa, and which have been rampant over the past few years in North America,” Pawson said.

Warren Buffett’s equity portfolio is concentrated in just 5 stocks. Here’s what they are