HomeUSAHomeowners lost $1.5 trillion in equity since May, as home prices drop
USA

Homeowners lost $1.5 trillion in equity since May, as home prices drop 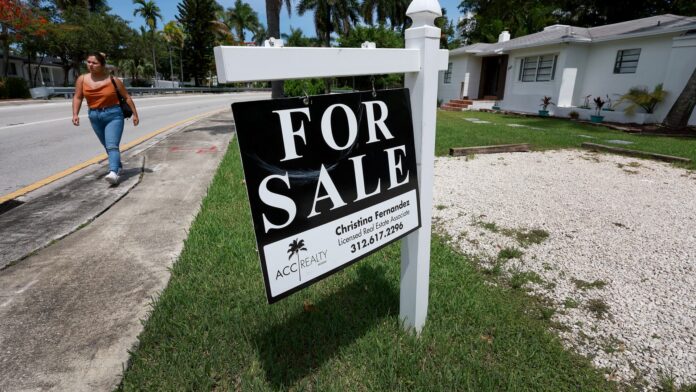 A home awaits sale at a reduced asking price in Glendale, California.

The historic run-up in home prices during the first two years of the pandemic gave homeowners record amounts of new home equity.

Since May, however, about $1.5 trillion of that has vanished, according to Black Knight, a mortgage software and analytics company. The average borrower has lost $30,000 in equity.

Homeowner equity peaked at $11.5 trillion collectively last May, after home prices jumped 45% since the start of the pandemic.

At the end of September, prices were still up 41%, and equity is still quite strong. Borrowers who bought their homes before the pandemic collectively have $5 trillion more than they did before the pandemic hit. That translates to a gain of $92,000 more equity per borrower than in February of 2020.

“While additional declines may be on the horizon, homeowner positions remain broadly strong,” noted Ben Graboske, Black Knight’s president of data and analytics.

But home prices began to weaken as mortgage rates rose last spring, making it a lot less affordable to buy. The monthly payment on the average home, with 20% down on a mortgage, is up nearly $1,000 since the start of this year.

In 10% of major markets – including Las Vegas, Miami, Los Angeles, Phoenix, Tampa and San Diego – homeowners have to spend twice the long-term average amount of median household income to make their monthly payments.

It’s why home sales began dropping sharply back in May − and prices are now following.

Home prices fell in September on a month-to-month basis for the third month in a row, though the decline wasn’t as steep as in July and August. While home prices usually drop from summer to fall due to seasonal slowdown in the market, they fell much more sharply than usual this year.

Prices are now down 2.6% since the end of June, which is the first 3-month drop since late 2018 and the steepest 3-month drop since early 2009, when the financial crisis hit. Since July, the median home price is down by $11,560. Prices, however, are still 10.7% higher than they were in September of last year.

As of the end of September, the amount of collective equity available to borrowers while still keeping 20% equity in the home fell by $1.17 trillion since May. That’s a 10% drop and the first decline in so-called tappable equity in three years.

The share of borrowers who owe more on their mortgages than their homes are worth is still quite low, at just 0.85%. But the numbers are beginning to rise.

Less than 500,000 borrowers are currently underwater on their mortgages, but that is still double what it was in May. Those who purchased their homes in the past year will be most at risk of going underwater since they bought at the peak of the market.

“This is obviously a situation that demands careful, ongoing monitoring, but to put that into context, just 3.6% of nearly 53 million U.S. mortgage holders are either underwater or have less than 10% equity in their homes – roughly half the share coming into the pandemic” added Graboske.