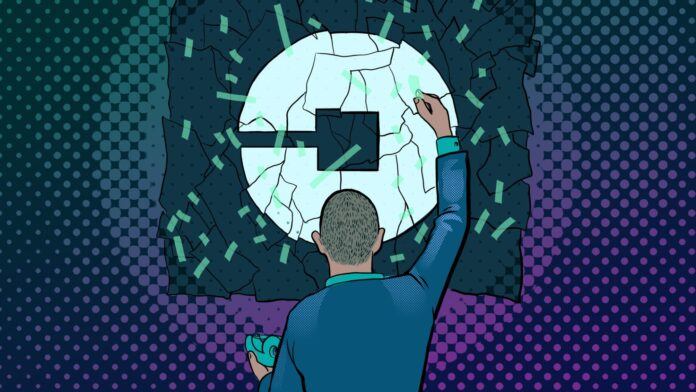 In this weekly series, CNBC takes a look at companies that made the inaugural Disruptor 50 list, 10 years later.

The creation of Uber in the wake of the 2008 financial crisis can be compared to an earlier disruptive innovation: the supermarket.

In 1930, in the early months of the Great Depression, Michael J. Cullen leased a vacant garage in Queens, New York, and built King Kullen, what is widely considered the first-ever supermarket and an example of the “resource integration” model that has created the Uber ecosystem.

Like King Kullen, Uber is the result of “clever resource integration” on the part of its founders, serial entrepreneurs Travis Kalanick and Garrett Camp.

At the time of Cullen’s innovation, none of the existing big dry grocery chains, including two of Cullen’s former employers, Kroger and A&P, had thought to do what he did. But its merits were clear, and the idea caught on quickly — the textbook definition of disruptive innovation.

Unfortunately for Uber, the comparison doesn’t end there.

Since Uber’s inception, a number of competitors have emerged in what we now know as the gig economy, whether it’s Disruptor 50 companies like Lyft in ride-hailing, DoorDash in food delivery, or Convoy in freight and trucking.

Over the past decade, Uber has faced a litany of obstacles, both internal and external. These include sexual harassment allegations, a slew of firings related to a workplace culture investigation, the alleged distribution of a rape victim’s medical records; as well as unflattering videos and emails from the former CEO and co-founder Kalanick. In addition, there were political pressures and tussles with regulators; union tensions, a legal battle with Alphabet, steep losses and infighting among investors.

Then, in 2017, the company brought in CEO Dara Khosrowshahi, who had been at the helm of Expedia since 2005 and was credited with expanding its global presence through several online travel booking brands, which include Expedia.com, Hotels.com and Hotwire. That decision concluded Uber’s long search to replace Travis Kalanick, who stepped down following a shareholder revolt and went down as one of the most prominent, and notorious, Silicon Valley startup founders. Similar to Theranos’s Elizabeth Holmes and WeWork’s Adam Neumann, his rise and fall at Uber became the subject of television drama.

How Uber has fared in the post-Travis era

By most accounts, Kalanick was maniacally single-minded about Uber. But in 2019, when he stepped down from the board and sold all of his stock in the ride-hailing company, Kalanick severed his last ties from the company he co-founded. Two years later, he was at the New York Stock Exchange during the company’s IPO, though he was not on the dais with company executives.

The company immediately garnered a valuation north of $80 billion and then it fell like a stone. This experiment – bringing a company public at a massive valuation that stated in its S-1 filing that there was a chance it’d never earn a profit – produced a mass sentiment shift among savvy investors and retail buyers alike. At the time, Ritholtz Wealth Management’s Josh Brown described it as “a time’s up moment.”

Of course, even Brown couldn’t have predicted that moment might actually arrive one year later in the form of a global pandemic that put almost every business into survival mode.

Ride-hailing companies have struggled with supply and demand since Covid-19 took drivers off the road. Uber had to rely on incentives to bring drivers back, which ate into financials. That seemed to be stabilizing in recent months, but the war in Ukraine has caused significant hikes in fuel prices. Analysts feared companies would have to pour millions into keeping drivers.

“Our need to increase the number of drivers on the platform is nothing new nor is it a surprise … there’s a lot of work ahead of us, but this is a machine that is rolling,” Khosrowshahi recently said on a conference call with investors. The company expects that to continue without “significant incremental incentive investments.”

The company posted its first-ever quarterly profit in late 2021, but then posted a massive loss due to investments in the first quarter of this year.

During Khosrowshahi’s tenure, the company has heavily invested in its grocery, beverage and convenience delivery segment through acquisitions, such as alcohol-delivery service Drizly last February, as well as Postmates, after failed talks to acquire food delivery service Grubhub. Yesterday, shares of Uber slumped 4.3% on news that Amazon agreed to take a stake in Grubhub in a deal that will give Prime subscribers a one-year membership to the food delivery service.

Focusing its acquisition efforts on its Eats segment during the pandemic allowed the company to retain some of its business despite a reduction in travel. It also will keep propelling the stock forward, investors believe.

Another key element going forward is the regulatory environment for the company.

Lawmakers have pushed to reclassify gig workers as full-time employees in an effort to ensure such things as minimum pay and benefits. But classifying drivers as contractors allows the companies to avoid the costly benefits associated with full-time employment, such as unemployment insurance.

Gig economy companies, including Uber, had a temporary win in 2020 in California, when voters approved Proposition 22 by a majority vote. That ballot measure effectively exempted several gig economy companies from the state’s recently enacted law, Assembly Bill 5, which had aimed to categorize their workers as full-time employees.

But there is really one overriding goal for Uber as far as the market is concerned, and it has become an immediate one: to generate “meaningful positive cash flows” for full-year 2022, which would mark a first for the company.

Khosrowshahi says Uber is on track to do just that.

— CNBC’s David Spiegel and Jessica Bursztynsky contributed to this story.