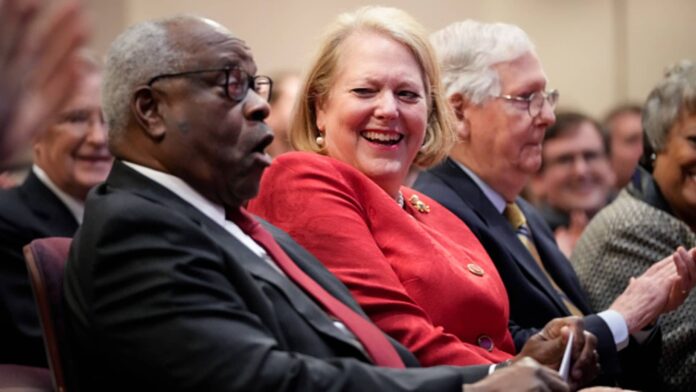 Associate Supreme Court Justice Clarence Thomas sits with his wife and conservative activist Virginia Thomas while he waits to speak at the Heritage Foundation on October 21, 2021 in Washington, DC.

The chairman of the House select committee investigating the Jan. 6, 2021, Capitol riot said Thursday that the panel will invite Virginia “Ginni” Thomas, wife of Supreme Court Justice Clarence Thomas, to testify about her involvement in efforts to reverse Donald Trump’s presidential election loss.

Disclosure of the planned invitation of Ginni Thomas came a day after a report that the committee had obtained emails between her and John Eastman, a lawyer who was advising Trump on the 2020 election.

Eastman was a leading proponent of a plan to have Trump and others pressure then-Vice President Mike Pence to block the certification by Congress of President Joe Biden’s electoral victory.

The Jan. 6 panel is set Thursday afternoon to hold its third public hearing, which will focus on details of Trump’s pressure on Pence, who refused to go along with the plan.

“We think it’s time that we, at some point, invite her [Ginni Thomas] to come talk to the committee,” said Rep. Bennie Thompson, D-Miss., the committee’s chair, to reporters, shortly before the scheduled start of that hearing.

Asked if the panel would subpoena Thomas if she refused to voluntarily testify, Thompson said, “Well, we’ll see what happens. And we’ll go from there.”

An aide to Rep. Liz Cheney of Wyoming, one of just two Republicans on the Jan. 6 committee, said Cheney also agrees that it is time for Ginni Thomas to be interviewed by the panel.

Cheney reportedly previously had leaned against calling in Ginni Thomas to testify.

The Washington Post, citing people involved in the panel’s probe, said that Thomas’ involvement in the bid to reverse Trump’s loss were more extensive than had been previously known.

The New York Times separately reported that Eastman had told another pro-Trump lawyer and Trump campaign officials on Dec. 24, 2020, claimed to be aware of a “heated fight” among Supreme Court justices over whether that court should consider cases involving Trump’s bid to overturn election results in several key states.

A spokeswoman for the Supreme Court did not immediately respond to CNBC’s request for comment.

Crypto.com customers worry it could follow FTX, CEO reassures them