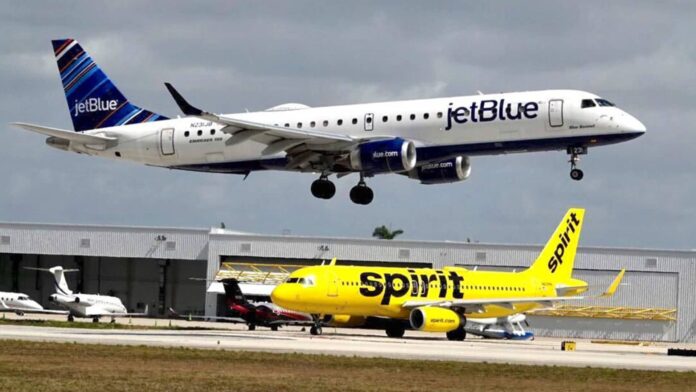 JetBlue Airways has reached a $3.8 billion deal to buy Spirit Airlines in a takeover that would create the country’s fifth-largest airline and remove a fast-growing budget carrier from the market.

The airlines announced the deal Thursday morning, hours after Spirit scrapped plans to combine with fellow discounter Frontier Airlines. Spirit lacked the shareholder support to win approval for the Frontier merger, which was first unveiled in February.

If approved by regulators, JetBlue’s takeover of Spirit would leave Frontier as the largest discount carrier in the U.S. It would also be the first major U.S. airline deal since 2016, when Alaska Airlines beat out JetBlue for Virgin America, and it could potentially open the door to more consolidation, possibly among smaller carriers, analysts have said.

JetBlue executives have argued for months that buying Miramar, Florida-based Spirit would help it compete with large carriers like American, Delta, United and Southwest, which control most of the U.S. market, and fast-track its growth by giving it access to more Airbus jetliners and pilots, both of which are in short supply.

The New York-based carrier said it will pay $33.50 a share in cash for Spirit, including a $2.50 prepayment if Spirit shareholders approve the deal and a 10 cent ticking fee starting next year until the deal is approved.

Spirit’s agreement to sell itself to JetBlue caps a months-long bidding war for the Miramar, Florida-based airline.

JetBlue’s surprise, all-cash bid for Spirit in April had thrown Spirit’s plan to combine with Frontier into disarray. For months, Frontier and JetBlue competed for Spirit, each sweetening their offers, until the Frontier deal was terminated Wednesday, clearing the way for JetBlue.

Spirit had said Wednesday it planned to continue talks to sell itself to JetBlue after ending the Frontier agreement.

Spirit previously rebuffed JetBlue’s bids repeatedly and said such a deal wasn’t likely to be approved by regulators, in part because JetBlue’s alliance with American in the Northeast, which the Justice Department sued to block last year.

The Justice Department didn’t immediately comment on the deal on Thursday.

Spirit shares were up about 4% in premarket trading after the deal was announced, while JetBlue was up 1%. Frontier was down 1%.

Tesla is under scrutiny by the EEOC, 10Q reveals