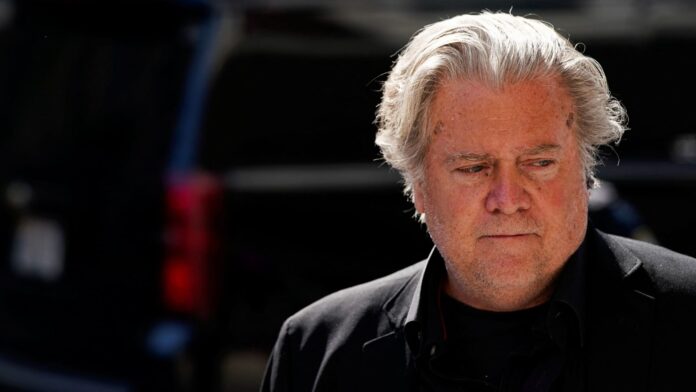 A federal judge on Thursday once again denied former Trump advisor Steve Bannon’s attempt to delay his trial on criminal contempt of Congress charges stemming from the House investigation of the Jan. 6 Capitol riot.

Bannon’s trial is set to begin Monday, after Judge Carl Nichols of U.S. District Court in Washington, D.C., rejected a motion from Bannon to delay it until at least mid-October.

“We’re still going to be at trial on Monday,” Nichols said, NBC News reported from the courthouse.

Bannon’s attorneys had argued in a court filing Wednesday that the large amount of publicity ahead of the trial raised the risk of prejudice against him among the jurors to be selected to hear his case.

They noted that CNN is scheduled to air a one-hour documentary on Bannon on Sunday evening, the day before the trial is set to start.

Nichols on Monday had rejected a prior bid by Bannon’s lawyers to postpone the trial by three months. Bannon’s attorney in that effort had argued that media coverage of the House hearings would harm his right to a fair trial.

In that same hearing, the judge also ruled that Bannon could not argue at trial that he failed to comply with the subpoena on the grounds of executive privilege, and limited who he could call as witnesses. The rulings gutted Bannon’s defense strategy — prompting one of his lawyers to reportedly ask in court, “What’s the point in going to trial here if there are no defenses?”

Bannon did not appear in the Washington courtroom on Monday or Thursday.

Bannon, who served just seven months as a top White House adviser to former President Donald Trump, faces at least 30 days in jail if convicted of the two contempt charges he faces for refusing to cooperate with the House select committee’s probe of the Capitol riot.

This is developing news. Please check for updates.

Crypto crash may leave ad-supported businesses with hole in budget