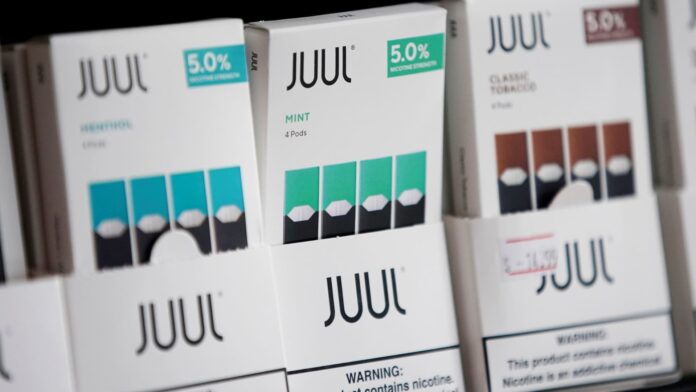 Juul brand vape cartridges are pictured for sale at a shop in Atlanta, Georgia.

Juul asked a federal appeals court on Friday for a temporary block on the Food and Drug Administration’s ban of its e-cigarettes.

The request came less than a day after the health agency told the company that it had to pull its vaping products off the U.S. market, effective immediately. According to the FDA, Juul’s applications to keep selling its vaping device and menthol- and tobacco-flavored nicotine pods gave insufficient or conflicting data about the potential risks of using the company’s products.

Juul disagreed, saying in a statement that it provided sufficient research and evidence to address the issues raised by the agency. The company’s chief regulatory officer, Joe Murillo, said in a statement on Thursday that Juul is exploring its options, which include appealing the decision or engaging directly with the FDA.

In a filing with the U.S. Court of Appeals for the D.C. Circuit, Juul asked for an emergency administrative stay until it can file a motion for a stay pending review by noon on Monday. If granted, the company and retailers would be able to keep distributing and selling Juul products until the court reviews the agency’s decision.

“[Juul’s] only prospect for meaningful relief that permits it to continue selling its products is an immediate stay,” the company said in the filing.

Juul claimed the FDA subjected it to unfair treatment compared with other e-cigarette makers. According to the filing, the agency’s press release announcing its ruling on Juul products was “more strident and threatening” than previous denials.

“FDA’s decision is arbitrary and capricious and lacks substantial evidence, and an immediate administrative stay is critical to protect [Juul Labs Inc.], its commercial partners and its customers,” Juul said.

The company also called out the agency for imposing immediate enforcement, rather than instating a transition period, which is typical unless the product poses an immediate risk to consumers.

China’s reopening ‘good news’ for growth — but could be inflationary, economists warn at Davos