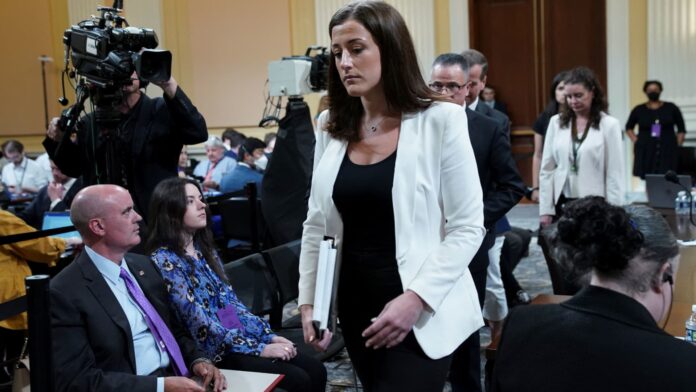 Cassidy Hutchinson, who was an aide to former White House Chief of Staff Mark Meadows during the administration of former U.S. President Donald Trump, departs after testifying during a public hearing of the U.S. House Select Committee to investigate the January 6 Attack on the U.S. Capitol, on Capitol Hill in Washington, June 28, 2022.

In scathing testimony before the House committee investigating the attacks on Capitol Hill, a former aide to then-President Donald Trump’s chief of staff, Mark Meadows, portrayed Trump as an enraged commander in chief in the weeks surrounding the riot.

A furious Trump lunged at his own Secret Service agent, threw plates and refused to help his vice president as throngs of angry rioters chanted “hang Mike Pence,” Meadows’ former aide Cassidy Hutchinson told lawmakers in more than two hours of testimony Tuesday recalling what she heard and saw in the days and weeks surrounding the events of Jan. 6, 2021.

Trump took to his social media page on Truth Social to distance himself from the former aide and claimed he hardly knew her.

Here are some key takeaways from the hearing.

Hutchinson said she was told the former president attacked a Secret Service agent after his security detail refused to take Trump to the U.S. Capitol while his supporters went to riot in the halls of Congress.

Hutchison recalled a conversation she had with then-White House official Tony Ornato. She told the House panel that he explained to her that after Trump told his supporters he would join them on their march on the Capitol that he insisted to the Secret Service to bring him there.

When Trump got in the presidential limo, Ornato said Trump was under the impression from Meadows that they were likely still going to the Capitol, Hutchinson testified.

When Secret Service Special Agent Bobby Engel relayed that they weren’t going to go because it wasn’t considered secure, Trump “had a very strong, a very angry response to that,” Hutchinson said Ornato told her.

“Tony described him as being irate,” Hutchinson said. Trump said something like: “I’m the effing president, take me up to the Capitol now.”

Engel again refused, at which point Trump “reached up towards the front of the vehicle to grab at the steering wheel. Mr. Engel grabbed his arm, said, ‘Sir, you need to take your hand off the steering wheel. We’re going back to the West Wing,'” Hutchinson testified.

Trump “then used his free hand to lunge toward Bobby Engel,” Hutchinson said she was told. She added that when Ornato told her this story, he motioned his hands toward his clavicles.

Trump was OK with weapons at rally

Trump then said words to the effect of, “I don’t effing care that they have weapons. They’re not here to hurt me, take the effing mags away. Let my people in, they can march to the Capitol from here,” Hutchison said in prerecorded testimony.

She said Trump was fine with removing metal-detecting magnetometers because the president was convinced he wasn’t personally in danger.

Hutchinson told the committee that Trump indicated to his team that he believed then Vice President Mike Pence deserved to be hanged. Trump’s supporters repeatedly chanted “Hang Mike Pence” after the former vice president helped certify the results of the election.

“I remember Pat Cipollone saying, ‘They’re literally calling for the VP to be effing hung,” Hutchinson told the committee in an interview to describe how the former White House counsel approached Meadows about the riot.

“You heard him, Pat. He thinks Mike deserves it. He doesn’t think they’re doing anything wrong,” Hutchinson said in describing Meadows’ response to Cipollone.

A few weeks before the attacks, in December 2020, Trump threw his lunch and dishes against a wall when he learned that former Attorney General William Barr and the Justice Department didn’t find any evidence of widespread election fraud, according to Tuesday’s testimony.

In the wake of his loss to President Joe Biden, Trump began to claim without evidence that the 2020 election had been “stolen” from him thanks to widespread voter fraud. His own attorney general later found that there was no evidence to support that assertion.

As the news broke that the Department of Justice had found no evidence to support his claims of election fraud, “I remember hearing noise coming from down the hallway,” Hutchinson testified.