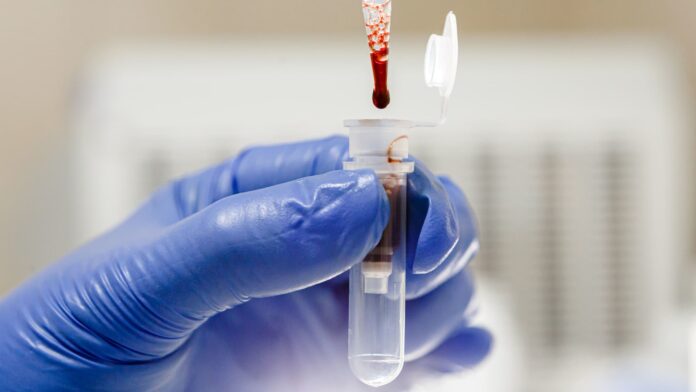 Blood grown in a laboratory has been transfused into humans for the first time in a landmark clinical trial.

LONDON — Blood grown in a laboratory has been transfused into humans for the first time in a landmark clinical trial that U.K. researchers say could significantly improve treatment for people with blood disorders and rare blood types.

Two patients in the U.K. received tiny doses — equivalent to a few teaspoons — of the lab-grown blood in the first stage of a wider trial designed to see how it behaves inside the body.

The trial, which will now be extended to 10 patients over the course of several months, aims to study the lifespan of lab-grown cells compared with infusions of standard red blood cells.

Researchers say the aim is not to replace regular human blood donations, which will continue to make up the majority of transfusions. But the technology could allow scientists to manufacture very rare blood types which are difficult to source but which are vital for people who depend on regular blood transfusions for conditions such as sickle cell anemia.

“This world leading research lays the groundwork for the manufacture of red blood cells that can safely be used to transfuse people with disorders like sickle cell,” said Dr. Farrukh Shah, medical director of Transfusion for NHS Blood and Transplant, one of the collaborators on the project.

“The need for normal blood donations to provide the vast majority of blood will remain. But the potential for this work to benefit hard to transfuse patients is very significant,” she added.

How does the technology work?

The research, which was conducted by researchers in Bristol, Cambridge and London, as well as NHS Blood and Transplant, focuses on red blood cells that carry oxygen from the lungs to the rest of the body.

Initially, a regular donation of blood was taken and magnetic beads were used to detect flexible stem cells that are capable of becoming red blood cells.

Those stems were then placed in a nutrient solution in a laboratory. Over the course of around three weeks, the solution encouraged those cells to multiply and develop into more mature cells.

The cells were then purified using a standard filter — the same kind of filter that is used when regular blood donations are processed to remove white blood cells — before being stored and later transfused into the patients.

For the trial, the lab-grown blood was tagged with a radioactive substance, often used in medical procedures, to monitor how long it lasts in the body.

The same process will now be applied for a trial of 10 volunteers, who will each receive two donations of 5-10mls at least four months apart — one of normal blood and one of lab-grown blood — to compare the cells’ lifespans.

How much will it cost?

It is also hoped that a superior lifespan of lab-grown cells could mean patients require fewer transfusions over time.

A typical blood donation contains a mixture of young and old red blood cells, meaning their lifespan can be unpredictable and sub-optimal. Lab-grown blood, meanwhile, is freshly made, meaning it should last the 120 days expected of red blood cells.

Still, there are significant costs currently attached to the technology.

The average blood donation currently costs the NHS around £145, according to NHS Blood and Transplant. Lab-grown substitutes would likely be more expensive.

NHS Blood and Transplant said there was “no figure” for the procedure as yet, but added that costs would be reduced as the technology is scaled up.

“If the trial is successful and the research works, then it could be introduced at scale in future years, meaning that costs would fall,” a spokesperson told CNBC.