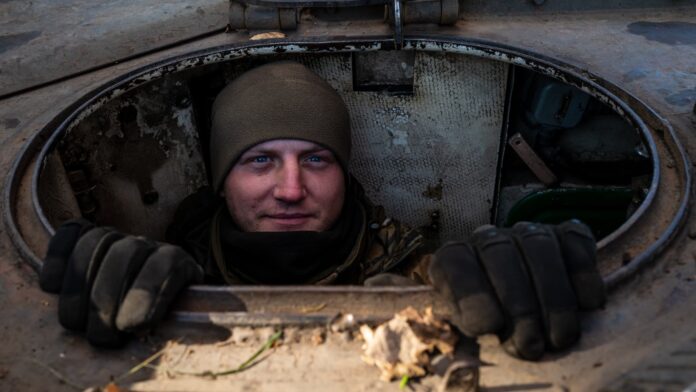 Russia has started constructing defensive structures around the occupied southern Ukrainian city of Mariupol, according to Britain’s Ministry of Defense.

Two plants are producing concrete pyramidal anti-tank structures, known as “dragon’s teeth,” for this purpose, it said in an intelligence update Tuesday.

“Dragon’s teeth have likely been installed between Mariupol and Nikolske village; and from northern Mariupol to Staryi Krym village,” the ministry said. Mariupol is a key part of Russia’s “land bridge” from Russia to Crimea, a key logistics line of communication, and was heavily fought over in the early months of the war.

Russian troops eventually occupied the whole of the city following a siege of a Ukrainian stronghold in the city’s Azovstal steel works.

A Russian soldier walks amid the rubble in Mariupol’s eastern side where fierce fighting between Russia/pro-Russia forces and Ukraine on March 15, 2022.

Dragon’s teeth have additionally been sent for the preparation of defensive fortifications in occupied Zaporizhzhia and Kherson, the ministry noted.

“Russia is fortifying its lines throughout areas of occupation. On 19 October 2022, Wagner Group owner Yevgeny Prigozhin claimed the construction of a fortified ‘Wagner Line’ of defences in Russian-occupied Luhansk Oblast,” it said.

“This activity suggests Russia is making a significant effort to prepare defences in depth behind their current front line, likely to forestall any rapid Ukrainian advances in the event of breakthroughs.”

Sullivan confirms U.S. has been in talks with Kremlin officials over nuclear threat

Jake Sullivan, White House national security advisor, in Washington, D.C. on April 14, 2022. Sullivan met with Oscar Stenstrom, State Secretary for Foreign Affairs to the Prime Minister of Sweden, to discuss the security situation in Europe in view of Russia’s invasion of Ukraine.

White House national security advisor Jake Sullivan confirmed Monday that lines of communication between the U.S. and Russia remain open, confirming a report that the U.S. has held talks with the Kremlin recently in a bid to dial down tensions around the potential use of nuclear weapons in Ukraine.

Speaking at an event at the Economic Club of New York on Monday, Sullivan did not say he had been engaged himself in direct talks but noted he had said repeatedly that “we have channels to communicate with the Russian Federation at senior levels,” Reuters reported.

The comment came after the Wall Street Journal reported Sunday that Sullivan had held undisclosed talks with top Russian officials in a bid to de-escalate tensions over the possible use of nuclear weapons. Concerns have risen in recent months that Russia could resort to using a nuclear weapon in Ukraine in a bid to gain the upper hand in the war, and to defend four regions it illegally annexed in September.

Ukraine’s President Volodymyr Zelenskyy said the country’s armed forces are advancing in parts of the country.

“In general, along the front, our forces are in a state of active defense – in some parts of the east and south, we are gradually pushing back the enemy. We are gradually moving forward,” Zelenskyy said in his nightly video address Monday.

He said the Donetsk part of the eastern Donbas “remains the epicenter of the greatest madness of the occupiers” and that Russian soldiers were dying “by the hundreds” every day.

Zelenskyy said that Russian forces had struck more than 50 settlements on Monday, including those in the regions of Donbas, Zaporizhzhia, Kherson, Mykolaiv, Kharkiv and Dnipropetrovsk. He said Ukraine had been boosted by the delivery of more air defense systems after NASAMS and Aspide missile systems from Kyiv’s allies arrived in Ukraine yesterday.

Ukraine has asked for more air defenses as it faces an escalation of drone and missile attacks by Russia, targeting its energy infrastructure.

“As of today, we can say that the recent escalation of Russian missile and drone terror has only resulted in the world responding — responding with new aid to Ukraine. We will do everything so that as many countries as possible join this aid,” Zelenskyy said.

Backlog of 77 ships waiting to transport agricultural goods from Ukraine

Ships, including those carrying grain from Ukraine and awaiting inspections, are seen anchored off the Istanbul coastline on November 02, 2022 in Istanbul, Turkey.

The organization overseeing the export of Ukrainian agriculture products said there is a backlog of 77 vessels waiting to be loaded with cargo.

The Joint Coordination Center also said that about 15 loaded vessels are waiting for inspection in Turkish territorial waters.

The Black Sea Grain Initiative, a deal brokered in July among Ukraine, Russia, Turkey and the United Nations, eased Russia’s naval blockade and saw the reopening of three key Ukrainian ports. Since the deal with signed, more than 10 million metric tons of grain and foodstuffs have left for destinations around the world.

Kyiv has previously blamed Moscow for holding up inspections and delaying vessel movements.

The White House said the Biden administration doesn’t plan to meet with Russian President Vladimir Putin on the sidelines of the upcoming G-20 summit.

“He has no intention of meeting with President Putin,” White House press secretary Karine Jean Pierre told reporters during a daily press briefing when asked if there were preparations for a bilateral.

She added that Ukraine should also be able to attend the G-20 meetings in Indonesia regardless if Putin attends.

“We’ve been very clear about how we see that invite,” Jean Pierre added.

“These comments do not tell us anything new or surprising, as we all know,” Jean-Pierre said in a press briefing. “It’s well known and well documented in the public domain that entities associated with Yevgeny Prigozhin have sought to influence elections around the world, including the United States.”

According to Jean-Pierre, Prigozhin “is a known bad actor who has been sanctioned by the United States, the United Kingdom, and also the European Union.”

“We also know that part of Russia’s efforts includes promoting narratives aimed at undermining democracy and sowing division and discord. It’s not surprising that Russia would be highlighting their attempted efforts and fabricate … a story about their successes on the eve of an election,” she said in light of Tuesday’s consequential midterm elections.

Prigozhin is a close ally of Russian President Vladimir Putin. Earlier this year, the U.S. State Department offered a $10 million reward for information about Prigozhin and other Russian entities and persons that knowingly interfered in U.S. elections.

A cafe without electricity in western Ukrainian city of Lviv, after three Russian missiles fired targeted energy infrastructure on Oct. 11, 2022. Lviv’s mayor said that one-third of homes were without power.

Ukraine’s state electricity operator announced blackouts in Kyiv and seven other regions of the country in the aftermath of Russia’s devastating strikes on energy infrastructure.

The move comes as Russian forces continue to pound Ukrainian cities and villages with missiles and drones, inflicting damage on power plants, water supplies and other civilian targets, in a grinding war that is nearing its nine-month mark.

Ukrenergo, the sole operator of Ukraine’s high-voltage transmission lines, initially said in an online statement that scheduled blackouts will take place in the capital and the greater Kyiv region, as well as several regions around it — Chernihiv, Cherkasy, Zhytomyr, Sumy, Poltava and Kharkiv.

Later in the day, however, the company released an update saying that scheduled outages for a specific number of hours aren’t enough and instead there will be emergency outages, which could last an indefinite amount of time.

Ukraine has been grappling with power outages and the disruption of water supplies since Russia started unleashing massive barrages of missile and drone strikes on the country’s energy infrastructure last month.

The Davos predictions that did not work out