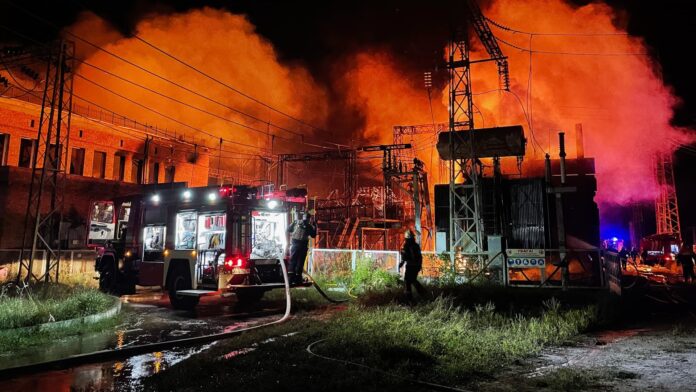 Ukraine at risk of running out of air defense weapons, needs the West’s help: Think tank

Ukraine is at risk of running out of air defense weapons and needs the West’s urgent help to defend against a tide of cheap Iranian-supplied drones that are targeting its energy infrastructure, according to analysts at the defense and security think tank RUSI.

Previously, they noted, “Russia’s attempts at strategic air attack have been limited to expensive cruise and ballistic missile barrages at a much more limited scale. These failed to achieve strategically decisive damage during the first seven months of the invasion.”

“However, the latest iteration is a more focused and sustainable bombardment of the Ukrainian electricity grid, blending hundreds of cheap Iranian-supplied Shahed-136 loitering munitions against substations with continued use of cruise and ballistic missiles against larger targets,” they said.

Local residents look at parts of an unmanned aerial vehicle, what Ukrainian authorities consider to be an Iranian-made drone Shahed-136, after a Russian drone strike, amid Russia’s attack on Ukraine, in Kyiv on Oct. 17, 2022.

This combination poses a risk to Ukraine, with the West warned to “avoid complacency about the need to urgently bolster Ukrainian air-defence capacity.”

“If Ukrainian SAMs [surface to air missile systems] are not resupplied with ammunition, and ultimately augmented and replaced with Western equivalents over time, the VKS [Russian Aerospace Forces] will regain the ability to pose a major threat,” the analysts warned.

In the short term, Ukraine needs large numbers of additional man-portable air-defense systems, known as “MANPADS,” and radar-guided anti-aircraft guns, such as the Gepard, “to sustain and increase its ability to intercept the Shahed-136s and protect its remaining power infrastructure and repairs to damaged facilities,” they said.

“In the medium term, Ukraine needs cost-effective ways to defend itself against the Shahed-136,” the analysts said.

One option, they added, could be “compact radar and/or laser ranging and sighting systems to allow numerous existing anti-aircraft guns to be much more accurate and effective against them.”

Vitali Klitschko, the mayor of Ukraine’s capital Kyiv, said Sunday that residents have to be prepared for any eventuality, including evacuating the city, in case of a total loss of energy and water.

“A few days ago, journalists asked me: does the capital have a blackout plan? I will answer again. In the war situation in which we live, it is necessary to have plans in case of various scenarios of development of events and emergency situations. And be ready to act,” he said on Telegram.

While the city’s authorities were preparing for winter, he said, “to ensure the life of the capital in these difficult conditions,” he warned that Russia was “insidious and cynical” and was trying to cause Ukraine’s energy network to collapse.

Vehicles drive along a street with St. Sophia Cathedral in the background, as the city is plunged into near darkness following a military strike that partially brought down the power infrastructure, in Kyiv on Oct. 31, 2022.

“Utility workers, energy workers concentrate and promptly eliminate damage to networks, do everything to ensure that residents have critical services. But we have to be prepared for various options for the development of events, although we hope that the worst will not happen,” he said.

Elsewhere yesterday, Klitschko told Ukrainian media that Kyiv’s residents should consider staying with relatives or friends outside the city. “If you have extended family or friends outside Kyiv, where there is autonomous water supply, an oven, heating, please keep in mind the possibility of staying there for a certain amount of time,” he said.

Ukraine has introduced “stabilization blackouts” or timed blackouts in a bid to reduce pressure on the country’s fragile energy system, which has been repeatedly attacked by Russia.

Ukraine’s President Volodymyr Zelenskyy warned Sunday night that Iranian drones, which Ukraine says Russia is using to attack its cities and energy networks, could be used to launch another barrage of attacks on its energy infrastructure.

“Today, the occupiers used Iranian attack drones again. There are downed ones. But, unfortunately, there are also hits,” Zelenskyy said in his nightly video address Sunday.

“We also understand that the terrorist state [Russia] is concentrating forces and means for a possible repetition of mass attacks on our infrastructure. First of all, energy. In particular, for this, Russia needs Iranian missiles.” He said Ukraine was preparing to respond.

Firefighters work to put out a fire in an energy infrastructure facility, damaged by a Russian missile strike, as Russia’s attack on Ukraine continues, in Zhytomyr, Ukraine, Oct. 18, 2022.

Eastern Ukraine continues to be the epicenter of hostilities this week, with Zelenskyy singling out the region, saying “very fierce Russian attacks in the Donetsk region continue.”

“The enemy suffers serious losses there, but despite everything, despite any losses, he continues to drive his mobilized soldiers and mercenaries to their deaths,” he said.