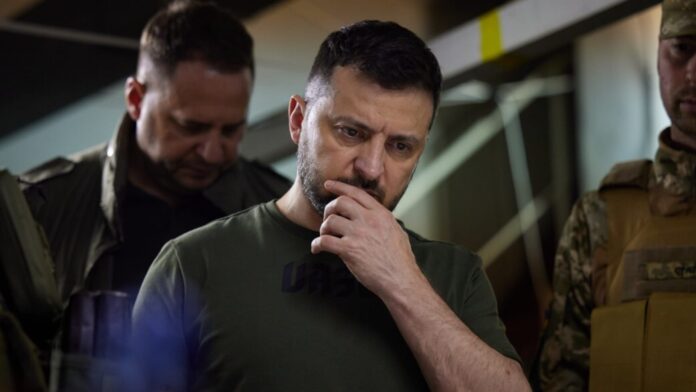 Big stumbling blocks to Ukraine becoming a member of the EU

Ukraine has requested to become a member of the EU, but the process is likely to take some time and it is unclear if there is a broad support to accept several new nations in the bloc.

The European Union could be about to throw its support behind Ukraine becoming its newest member, but the process will not be easy.

Two main factors mean that Kyiv might have several years to wait before officially joining the political bloc.

A number of nations in the Western Balkans have already been promised EU membership — but negotiations have yet to begin. This is the case of North Macedonia, for instance.

One risk for the EU is that it is seen to be giving preferential treatment to Kyiv — upsetting other parts of the continent and potentially pushing them closer to Russia.

In addition, political analysts think that without a peace agreement with Russia, Ukraine will struggle to become a member of the EU.

Read more here: Ukraine wants to join the European Union. But it is not going to be easy

The fight in Donbas is tight, with neither side gaining much ground, UK says

Smoke and dirt rise from shelling in the city of Severodonetsk during fight between Ukrainian and Russian troops in the eastern Ukrainian region of Donbas on June 7, 2022.

Fierce fighting in eastern Ukraine has continued into this week, with Russian forces pounding the city of Severodonetsk and surrounding areas while Ukraine seeks to hold ground to avoid conceding more of the contested region to Russia.

In the last 24 hours, it’s unlikely that either side has gained significant ground, according to Britain’s Ministry of Defense.

“Russia continues to attempt assaults against the Sieverodonetsk pocket from three directions although Ukrainian defences are holding,” the ministry said on Twitter on Wednesday. The intelligence update noted that while Russia is concentrating its offensive in the central Donbas sector, it has remained on the defensive on its flanks.

Elsewhere, the ministry said Ukrainian forces have recently achieved some success by counter-attacking in the southwestern Kherson region, including regaining a foothold on the eastern bank of the Ingulets River.

Nonetheless, “with the frontage of the occupied zone stretching for over 500km, both Russia and Ukraine face similar challenges in maintaining a defensive line while freeing up capable combat units for offensive operations,” the U.K. said.

Sweden and Finland want to join NATO. Here’s how that would work

Members of the North Atlantic Treaty Organization (NATO) are due to meet later this month for a landmark summit in Madrid, Spain.

The recent requests from Finland and Sweden to join the alliance will be high in the agenda, particularly after Turkey raised concerns about allowing these new members in.

But how does a country join NATO and what does this mean for the rest of the world? CNBC takes a look at the process and what Stockholm and Helsinki have to offer to the  defense alliance.

More than 1,000 Mariupol fighters have been sent to Russia, report suggests

A screen grab taken from a video released by Russian Defense Ministry shows Ukrainian soldiers being evacuated from the Azovstal steel plant in the port city of Mariupol, Ukraine, on May 17, 2022.

More than 1,000 Ukrainian soldiers who were captured after the fall of the southern port city Mariupol to Russian forces have been transferred to Russia for “investigation,” according to Russian state news agency Tass.

Citing a Russian law enforcement source, Tass reported Tuesday that more Ukrainian prisoners are expected to be transferred to Russia in the near future.

“More than 1,000 people from Azovstal have been transferred to Russia. Law enforcement agencies are working closely with them. In the near future, after face-to-face confrontations with a number of prisoners of war, the investigation also plans to send them to Russia,” the source said.

Tass did not have official comments from the investigating authorities and law enforcement agencies in its report and CNBC was unable to immediately verify the information.

There have been widespread concerns about the fate and treatment of hundreds of Ukrainian fighters captured (Russia says they surrendered) following the siege of Mariupol, and particularly the siege of the Azovstal steelworks in the city.

The steelworks became the last stronghold for hundreds of Ukrainian soldiers and civilians who were holed up within the complex for several months before Russian forces eventually seized the works.

Hundreds of Ukrainian fighters and civilians had been taken to a prison camp in Russian-controlled territory in Ukraine following the siege.

Coming winter will be ‘the most difficult’ since independence, Zelenskyy warns

Ukraine’s President Volodymyr Zelenskyy has said the government and energy companies have met to prepare energy provision for the coming winter, which he said would be the most difficult one for the country since its independence following the collapse of the Soviet Union in 1991.

“Whatever the occupiers plan for themselves, we must prepare for the next winter — in our state, on our land, for all citizens,” he said in his nightly address Tuesday evening, adding that the purchasing of a sufficient amount of gas for the heating season, coal accumulation, and electricity production were discussed by Ukrainian ministries and energy companies.

“In the current situation due to Russia’s aggression, this will indeed be the most difficult winter of all the years of independence,” Zelenskyy said.

The president added that “at this time, we will not be selling our gas and coal abroad. All domestic production will be directed to the internal needs of our citizens.

At the same time, Zelenskyy said, Ukraine is doing what it can to increase its electricity export capabilities.

An avenue in Mariupol on April 12, 2022. The besieged Ukrainian city could now be facing a deadly cholera outbreak, NBC News cited local officials.

Drinking water in the city has been contaminated by decomposing garbage and corpses, increasing the risk of a cholera outbreak, NBC reported, citing an advisor to the occupied city’s mayor.

The advisor, Petro Andryushchenko, also added that a nearby Russian city across the border was preparing infectious disease units in case a cholera outbreak might affect Russian soldiers in Mariupol, NBC News reported.

“So really, this threat is not only recognized by the World Health Organization and us, but the occupants as well,” Andryushchenko said on Ukrainian television, according to NBC News.

He said in a different interview that Russian authorities controlling Mariupol were effectively shutting down the city and imposing a self-imposed quarantine.

NBC News and CNBC could not independently confirm Andryushchenko’s claim.

Cholera can kill within hours if left untreated, according to the WHO.

The organization last month warned of the threat of infectious disease outbreaks in Mariupol, citing local nongovernmental organizations that the city’s sewage and drinking water were getting mixed, creating “a huge hazard for many infections, including cholera.”

Former German Chancellor Angela Merkel speaks during a talk about “the challenging issues of our time” with author Alexander Osang (not pictured) at the Berliner Ensemble theatre in Berlin, Germany June 7, 2022.

Angela Merkel defended her approach to Ukraine and Russia during her 16 years as Germany’s leader, saying that a much criticized 2015 peace deal for eastern Ukraine bought Kyiv precious time and she won’t apologize for her diplomatic efforts.

In her first substantial comments since leaving office six months ago, Merkel said there was “no excuse” for Russia’s “brutal” attack on Ukraine and it was “a big mistake on Russia’s part.”

Merkel, who dealt with Russian President Vladimir Putin throughout her chancellorship, rejected a suggestion that she and others engaged in appeasement that ultimately enabled the invasion.

“I tried to work toward calamity being averted, and diplomacy was not wrong if it doesn’t succeed,” she said in an on-stage interview at a Berlin theater that was televised live. “I don’t see that I should say now that it was wrong, and so I won’t apologize.”

“It is a matter of great sorrow that it didn’t succeed, but I don’t blame myself now for trying,” Merkel said.

Service members of pro-Russian troops ride an infantry fighting vehicle during Ukraine-Russia conflict in the town of Popasna in the Luhansk Region, Ukraine June 2, 2022.

The assessment comes after weeks of brutal fighting and heavy Russian artillery bombardment of much of the eastern Donbas, of which Luhansk is a part. Moscow says that full control over the Donbas is an “unconditional priority.”

Much of the fiercest fighting, including street battles, is currently taking place in Luhansk in the cities of Sievierodonetsk and Lysychansk, where Russian forces have won major ground despite some recent successful efforts by Ukrainian troops to claw back territory.

Some officials and pundits in other countries have suggested Ukraine should give up the Donbas to Russia in exchange for peace, an idea Ukraine fiercely rejects. Kyiv and many of its Western allies warn that if they give up land to Russia, Moscow will only be incentivized to expand its gains and try to capture more Ukrainian territory. Russia has been ambiguous on whether it would seek to capture more land.

The World Bank cut its projection for global growth by 1.2 percentage points to 2.9% for this year, citing Russia’s invasion of Ukraine as a further blow that was worsening an already hard-hit economy still recovering from the Covid pandemic and facing mounting inflation.

The world is entering a “protracted period of feeble growth and elevated inflation,” the organization wrote in its latest Global Economic Prospects report.

Russia’s war in Ukraine has slammed global food exports, particularly grains and cooking oils — a huge proportion of which are exported by the two warring countries — because Russian forces are blocking Ukraine’s vital Black Sea ports.

A driver unloads a truck at a grain store during barley harvesting in the village of Zhovtneve, Ukraine, July 14, 2016.

“With inflation now running at multi-decade highs in many countries and supply expected to grow slowly, there is a risk that inflation will remain higher for longer,” World Bank President David Malpass wrote.

The World Bank expects global growth to slow by 2.7 percentage points between 2021 and 2024. Global growth had reached around 5.5% in 2021, the Bank wrote previously.