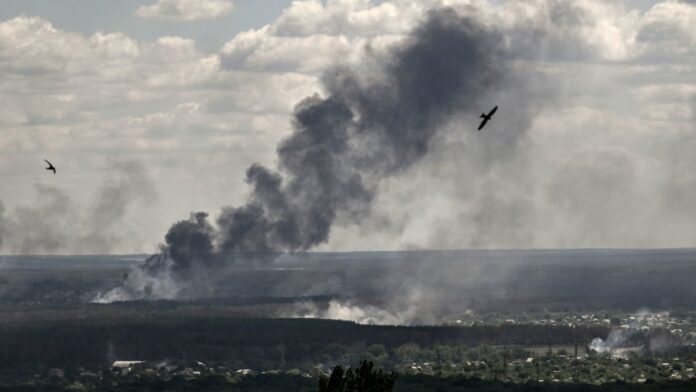 The U.K.’s Ministry of Defense says Russian forces have likely increased their efforts to advance to the south of Izium while fighting continues in Severodonetsk.

“Russia’s progress on the Izium axis had remained stalled since April, after Ukrainian forces made good use of the terrain to slow Russia’s advance,” the ministry said in its latest intelligence update.

“Russia has likely attempted to reconstitute [the Eastern Group of Forces] after they suffered very heavy casualties in the failed advance on Kyiv, but its units likely remain understrength. Russia likely seeks to regain momentum in this area in order to put further pressure on Sieverodonetsk, and to give it the option of advancing deeper into the Donetsk Oblast,” it added.

People wait to be evacuated in Lysychansk in eastern Ukraine on June 8, 2022.

Russian forces are in control of most of the city of Severodonetsk in eastern Ukraine and are heavily shelling the nearby city of Lysychansk, according to the governor of the Luhansk region.

In an online post, Serhiy Haidai said Ukrainian troops in the Luhansk region are not under threat of encirclement.

Russian forces temporarily control more than 90% of the region, he added.

Smoke and dirt rise from shelling in the city of Severodonetsk this week. “Severodonetsk remains the epicenter of the confrontation in Donbas,” Ukrainian President Volodymyr Zelenskyy said via Telegram, according to a translation.

Ukrainian President Volodymyr Zelenskyy said that fighting for control of the city of Severodonetsk may decide the outcome of the conflict with Russian forces in the east of the country.

“According to the results of this day, the 105th day of the full-scale war, Severodonetsk remains the epicenter of the confrontation in Donbas. We defend our positions, inflict significant losses on the enemy,” Zelenskyy said via Telegram, according to a translation.

“This is a very fierce battle, very difficult. Probably one of the most difficult throughout this war. I am grateful to everyone who defends this direction. In many ways, the fate of our Donbas is being decided there.”

The United Nations is pursuing a deal that would allow grain exports from Ukraine through the Black Sea and unimpeded access to world markets for Russian food and fertilizers.

Secretary-General Antonio Guterres told U.N. correspondents on Wednesday that without the deal hundreds of millions of people in developing countries face the threat of an unprecedented wave of hunger, three months after Russia invaded its smaller neighbor.

Guterres said, “Ukraine’s food production and the food and fertilizer produced by Russia must be brought into world markets, despite the war.”

Senior officials have been working closely with contacts in Moscow, Kyiv, Ankara, Brussels and Washington for the past 10 days, Guterres said. He said he didn’t want to jeopardize the chances of success by revealing details.

“This is one of those moments when silent diplomacy is necessary, and the welfare of millions of people around the world could depend on it,” he said.

President Joe Biden spoke with Polish President Andrzej Duda and reaffirmed U.S. commitment to bolster security along Poland’s borders, the White House said in a readout of the call.

“They also discussed their ongoing support for the people and government of Ukraine in response to Russian aggression,” the readout said.

Biden last met with Duda in March during a high-profile trip to Poland.

Smoke rises in the city of Sievierodonetsk during heavy fighting between Ukrainian and Russian troops on May 30, 2022.

Ukrainian troops may soon have to retreat from a key eastern city, the region’s governor and Western military analysts said Wednesday, as Russian advances force them back.

The street-by-street battle for Sievierodonetsk has become the focus of the conflict in recent weeks, with Russia slowly advancing toward its larger goal to take full control of the industrial Donbas region.

The last major city still under Ukrainian control in the Luhansk province — which together with neighboring Donetsk makes up the Donbas — has been pummeled by artillery in a back-and-forth fight that remains hard to decipher. Kyiv said a counteroffensive over the weekend had helped its forces regain some ground, but the situation appears to have deteriorated further since then.

Satellite imagery released by U.S. defense contractor Maxar Technologies on Wednesday appeared to show what it said was “significant damage” in Sievierodonetsk and nearby areas amid fears that the city could be turned into a new Mariupol, the key port that was besieged by the Russians and left in ruins by relentless fighting.