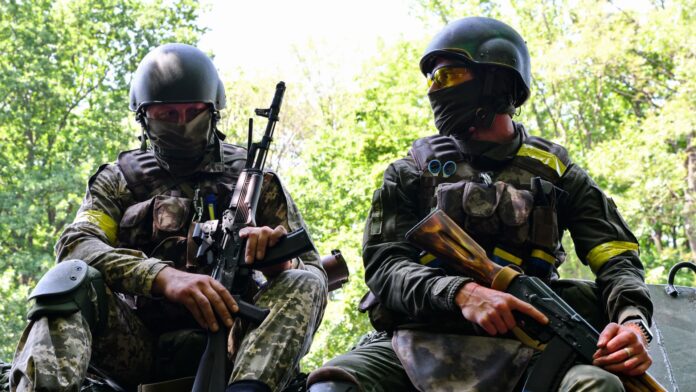 ‘It is getting harder’ to defend Severodonetsk, official concedes

Serhiy Haidai, the head of Luhansk’s regional administration region who has become a well-known voice amid severe fighting in the Donbas region, has said “it is getting harder” to hold Severodonetsk. He added that Ukrainian fighters were doing their best in the city now believed to be 80% controlled by Russian forces.

Fighting continues in Severodonetsk, Toshkivka and near Vrubivka, Haidai said in his latest update on Wednesday and there are “many wounded.”

“It is getting harder, but our military is holding back the enemy from three sides at once,” he said.

“They are defending Severodonetsk and are not allowed to advance to Lysychansk,” he said, a neighboring city across the Siverskiy Donets river from Severodonetsk. “However, the Russians are close, the population suffers and houses are destroyed,” Haidai said.

The Ukrainian official said Russians continued to target the Azot chemicals plant where hundreds of troops and civilians are believed to be sheltering.

After more than a month of heavy fighting, Russian forces now control the majority of Severodonetsk, the U.K.’s Ministry of Defence said in its latest intelligence update Wednesday.

The ministry noted that Russia’s urban warfare tactics, which are reliant on heavy use of artillery, have generated extensive collateral damage throughout the city, making it reminiscent of Mariupol, the southern port city also severely attacked by Russia earlier in the invasion.

Smoke rises after a military strike on a compound of Sievierodonetsk’s Azot Chemical Plant, amid Russia’s attack on Ukraine, in the town of Lysychansk, Luhansk region, Ukraine June 10, 2022.

The ministry noted that elements of Ukraine’s armed forces, along with several hundred civilians, are sheltering in underground bunkers in the Azot Chemical Plant, in the city’s industrial zone.

“Russian forces will likely be fixed in and around Azot whilst Ukrainian fighters can survive underground. This will likely temporarily prevent Russia from re-tasking these units for missions elsewhere,” it said.

Russia’s defense ministry said on Tuesday that it would open a “humanitarian corridor” to allow for the evacuation of the Azot plant and called on Ukrainian fighters holed-up there to lay down their weapons. One pro-Russian separatist military official told the fighters remaining in Severodonetsk — which is now cut off after the three bridges into the city were destroyed — they should “surrender, or die.”

The U.K. added that it is highly unlikely that Russia anticipated such robust opposition, or such slow, attritional conflict during its original planning for the invasion.

Ukraine says ‘procrastination’ over its need for weapons ‘cannot be justified’

Ukraine’s patience over its lack of long-range weapons appears to be wearing thin with Ukrainian President Volodymyr Zelenskyy again pleading this week for more such weapons.

In his nightly address Tuesday, Zelenskyy said that while Ukraine’s air defenses managed to “cut the wings” of some Russian missiles targeting the country, others had caused more death and destruction in the Lviv and Ternopil regions in western Ukraine.

“Our country does not have enough of [these] yet, but it is in our country and right now that Europe has the greatest need for such weapons. Procrastination with its provision cannot be justified,” Zelenskyy said, addressing his nation at the end of the 111th day of the war.

Ukrainian forces are battling a severe onslaught from Russian forces in eastern Ukraine with 80% of the key city of Severodonetsk now controlled by the occupiers. Zelenskyy has made repeated pleas for Ukraine to receive more long-range weapons from its Western allies, as well as tanks, drones and armored vehicles.

Smoke rises during shelling in the city of Severodonetsk, eastern Ukraine on May 21, 2022. Russian troops control about 80% of Severodonetsk, the last city now partially held by Ukraine in Luhansk, and have destroyed all three bridges leading out of it, the Associated Press reported, citing an official.

Russian troops control about 80% of Severodonetsk and have destroyed all three bridges leading out of the last city in Luhansk that’s partially held by Ukraine, according to the Associated Press which cited the governor of Luhansk.

Ukrainian forces have been pushed to the industrial outskirts of the city because of the “scorched earth method and heavy artillery the Russians are using”, the AP said, citing Governor Serhiy Haidai.

Haidai said that a mass evacuation of civilians now was “simply not possible” due to the persistent bombing and fighting.

However, he added that there was still an opportunity to get civilians out of the city because Russian soldiers have not completely blocked off the city yet.

“There is still an opportunity for the evacuation of the wounded, communication with the Ukrainian military and local residents,” he told the AP.

More than 500 civilians are sheltering in the Azot chemical plant, which is being attacked by
Russian troops, Haidai said.

The Russian defense ministry has said it will open a “humanitarian corridor” on Wednesday to allow Ukrainian civilians sheltering in the plant to leave the complex.

Coordinated global sanctions may not immediately affect the Kremlin’s ability to finance its defense industrial base or its ongoing war in Ukraine, Russian economy expert Richard Connolly said.

“The Russian state’s ability to finance the war and its military remain pretty robust,” said Connolly, director of the Eastern Advisory Group and a fellow at the Centre for Russian, European and Eurasian Studies.

“Even in the event that Moscow has to run a budget deficit. It’s got plenty of fiscal room to do this. It has an extremely low debt level, it doesn’t need to borrow abroad, it can borrow from domestic sources of cash,” he explained. “And at the moment, it has this very positive cash flow. So for as long as the political will is there in the Kremlin and for as long as export prices remain high, I don’t see any immediate financial constraints confronting the Kremlin.”

“I’d be very surprised if they weren’t high on the eve of the war and therefore, I would imagine that defense industrial enterprises will continue to produce in the months to come,” he said. He also said that Russia has previously shown that it can source Western tech components used in its defense industry despite sanctions.

Putin likely not at risk of losing power amid war in Ukraine, expert says

As the globe coordinates global sanctions against Moscow and a segment of Russian society opposes the Kremlin’s war in Ukraine, Russian President Vladimir Putin may not be at risk of losing his power.

“I would say there are very few signs that he’s at risk of losing power anytime soon,” explained Andrea Kendall-Taylor, a senior fellow and director of the Transatlantic Security Program at the Center for a New American Security, or CNAS.

Kendall-Taylor, a national security expert who specializes in Russia and authoritarian regimes, told a virtual audience at the CNAS National Security Conference that Putin’s hold on power is nonetheless considerably weaker since the start of the war.

“I don’t want to necessarily overstate public support for the war, because there is quite clearly a segment of society who opposes it,” Kendall-Taylor said.

She added that in the scenario in which Putin was to die in office, another autocrat would likely replace him.

EU looks to east Mediterranean as gas alternative to Russia

(R to L) Israel’s Prime Minister Naftali Bennett and his Italian counterpart Mario Draghi give a joint press statement at the Prime minsters office in Jerusalem on June 14, 2022.

European leaders visiting Israel expressed hope that natural gas supplies from the eastern Mediterranean could help reduce dependence on Russia as the Ukraine war drags on.

Israel has emerged as a gas exporter in recent years following major offshore discoveries and has signed an ambitious agreement with Greece and Cyprus to build a shared pipeline. New supplies could help Europe ramp up sanctions on Moscow.

“On the energy front, we will work together in using gas resources of the eastern Mediterranean and to develop renewable energy,” Italian Prime Minister Mario Draghi said at a joint press conference with his Israeli counterpart, Naftali Bennett.

“We want to reduce our dependence on Russian gas and accelerate energy transition toward the climate objectives we’ve given ourselves,” he said.