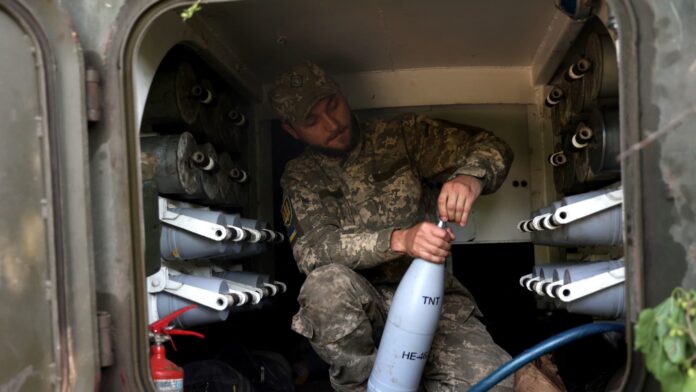 Refugees from Donbas at the train station of Lviv, Ukraine. More than 100 million people have been forcibly displaced worldwide by May 2022 due to persecution, conflict, violence, and human rights violations, the UN refugee agency said.

At the end of 2021, 89.3 million people were forcibly displaced, well over double the number from 10 years ago, according to UNHCR’s annual Global Trends report.

That figure has swelled to over 100 million, driven in part by Russia’s invasion of Ukraine which the agency said caused the fastest and one of the largest forced displacement crises since World War II.

Grandi also criticized the “monopoly” of resources given to Ukraine compared with other underfunded programs for the displaced, Reuters reported.

“Ukraine should not make us forget other crises,” he said, according to Reuters.

Russian forces are using “all available firepower” to pound the key target of Severodonetsk and neighboring Lysychansk as well as Bilohorivka, a settlement to the west of the twin cities that are separated by the Siverskyi Donets river.

In the latest military update from Ukraine’s armed forces, spokesman Oleksandr Shtupun said that “the Russian occupiers continue to fire on the units of our troops with all available firepower.”

“The enemy does not stop trying to establish full control over the city of Severodonetsk” he said, adding that “the fighting continues.”

Russian forces have been throwing everything they can at seizing Severodonetsk, which was the last major Ukrainian-held city in the Luhansk province. Around 80% of the city was in Russian hands yesterday, with fierce street battles taking place for, as President Zelenskyy put it earlier this week, “every meter of the city.”

Zelenskyy has thanked Ukrainian forces for holding out in the face of Russia’s onslaught in the Donbas.

Ukrainian President Volodymyr Zelenskyy has said he is grateful for a new $1 billion support package including coastal defense, artillery and modern rocket systems as Russia presses home its advantage in eastern Ukraine.

“I am grateful for this support, it is especially important for our defense in Donbas,” he said in his nightly address Wednesday, adding that he had already discussed with President Biden “the tactical situation on the battlefield and ways to accelerate our victory. Sanctions, politics, economic cooperation — we are preparing for new steps.”

He said Russia was already responding to Ukraine’s foreign policy success, noting that “gas pressure on Europe is growing again. The shelling of Ukrainian positions and peaceful cities is intensifying again.”

“We are defending Donbas,” he said, saying that the Ukrainian army had proved itself “despite the significant advantage of the Russian army in the number of soldiers and equipment.”

“Of course, we will do our best to outmatch their advantages for now. Every day I fight for Ukraine to get the necessary weapons and equipment.”

The Biden administration has yet to see China work with Russia amid punishing rounds of coordinated global sanctions in response to the Kremlin’s war in Ukraine.

In the past week, national security adviser Jake Sullivan and Secretary of Defense Lloyd Austin met separately with high-level Chinese officials and reiterated that the world’s second-largest economy should not alleviate economic pressure on Russia.

Since Moscow invaded Ukraine on Feb. 24, the Biden administration has deployed more than 100,000 U.S. troops to NATO-member countries and authorized $5.6 billion in security assistance to Ukraine.

Read more: Biden to send another $1 billion in military aid to Ukraine

The Pentagon said that the latest tranche of weapons for Kyiv, the 12th such installment, is valued at $350 million and includes:

The U.S. will also provide Ukraine with two Harpoon coastal defense systems, thousands of secure radios, night vision and thermal devices along with funding for training and maintenance support. That aid is collectively valued at $650 million.

UN says at least 4,452 killed in Ukraine since start of war

People stand amid newly-made graves at a cemetery in the course of Ukraine-Russia conflict in the settlement of Staryi Krym outside Mariupol, Ukraine May 22, 2022.

The United Nations has confirmed 4,452 civilian deaths and 5,531 injuries in Ukraine since Russia invaded its ex-Soviet neighbor on Feb. 24.

The Office of the U.N. High Commissioner for Human Rights said the death toll in Ukraine is likely higher, because the armed conflict can delay fatality reports.

The international organization said most of the civilian casualties recorded were caused by the use of explosive weapons with a wide impact area, including shelling from heavy artillery and multiple launch rocket systems, as well as missiles and airstrikes.

Poland’s state-owned oil and gas company PGNiG said Russia’s gas giant Gazprom had informed it on Tuesday that it would halt gas supplies that are delivered via the Yamal pipeline on Wednesday morning.

Russia’s Gazprom announced a reduction in natural gas flows through a key European pipeline for the second day in a row, hours after Germany’s vice chancellor said its initial move appeared to be political rather than a result of technical problems.

The state-owned energy giant said on Twitter that deliveries through the Nord Stream 1 pipeline to Germany would be cut again Thursday, bringing the overall reduction through the undersea pipeline to 60%.

The new cut came a day after Gazprom said it would reduce flows by 40% after Canadian sanctions over the war in Ukraine prevented German partner Siemens Energy from delivering overhauled equipment. It blamed the same issue for the additional reduction.

Gazprom also told Italian gas giant Eni that it would reduce gas through a different pipeline by roughly 15%. The reason for the reduction has not been made clear, and the Italian company said it was monitoring the situation.

Outage reported by thousands users around the world

China tourist destination set a GDP target, but Covid locked it down