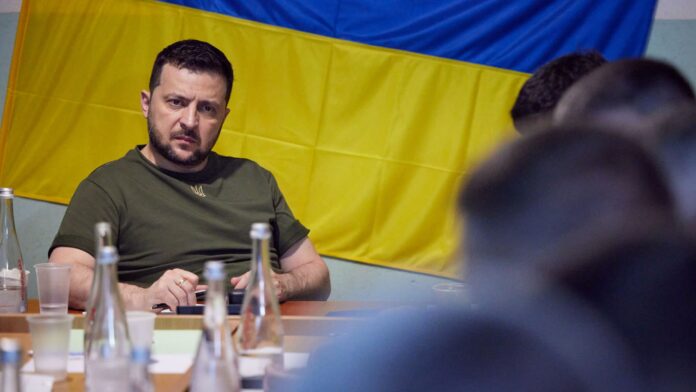 Service members of pro-Russian troops on an infantry fighting vehicle in the town of Popasna in the Luhansk Region, Ukraine, on June 2, 2022.

Russia’s air force has underperformed and its failure to consistently deliver air power is likely one of the most important factors behind the country’s very limited campaign success, according to the latest intelligence update from Britain’s Ministry of Defense.

The ministry said Russia’s air force “cannot gain full air superiority and has operated in a risk-[averse] style, rarely penetrating deep behind Ukrainian lines.” It noted that some of the underlying causes of its difficulties echo those of Russian forces on the ground in Ukraine.

“For years, much of Russia’s air combat training has highly likely been heavily scripted and designed to impress senior officials, rather than to develop dynamic initiative amongst air crews,” the U.K. said. It added that while Russia has an impressive roster of relatively modern and capable combat jets, “the air force has also almost certainly failed to develop the institutional culture and skill-sets required for its personnel to meet Russia’s aspiration of delivering a more Western-style modern air campaign.”

That has led to a greater than planned weight of effort falling to ground troops, who are becoming exhausted, the intelligence report suggested, and to advanced cruise missiles, “stocks of which are likely running low.”

Russia’s ground and tactical air operations have continued to focus on the Donbas in eastern Ukraine this weekend, the U.K. noted.

A Russian military official has claimed that more than 1.9 million Ukrainian citizens, including 307,000 children, have been “evacuated” to the territory of the Russian Federation since the start of the war.

“Despite all the difficulties created by the Kyiv authorities, over the past 24 hours, without the participation of the Ukrainian side, 29,733 people, including 3,502 children, have been evacuated to the territory of the Russian Federation from dangerous regions of Ukraine and the Donbas republics,” Mikhail Mizintsev, head of the National Defense Control Center of the Russian Federation, said at a briefing on Saturday, Russian state news agency Interfax reported.

He said 307,423 children had been “evacuated” since the invasion started.

People, mainly women and children, pass through a train station in Poland after fleeing war-torn Ukraine on April 9, 2022.

There have been widespread concerns over the forced or coerced transfer of Ukrainian citizens to Russian territory. At times, humanitarian corridors opened to allow civilians to leave besieged cities, such as Mariupol, have led into Russian territory. There have been reports that civilians evacuated from the besieged Mariupol steelworks were taken to a former prison camp in an occupied part of Ukraine.

Russia says it is protecting ethnic Russians in parts of Ukraine, specifically in the east and south (the Donbas and Crimea, respectively).

Ukrainian President Volodymyr Zelenskyy has said that he expects Russia to intensify its attacks on his country while it awaits a European Union decision this week on whether it will grant Ukraine the status of a candidate country — a move that could enable it to join the bloc at some future date.

Ukraine’s President Volodymyr Zelenskyy at a meeting with local authorities during a visit to the southern city of Mykolaiv, Ukraine, on June 18, 2022. The country is awaiting a European Union decision this week on whether it will grant Ukraine the status of a candidate country.

The president said Russia could intensify its “hostile activities” this week as a result, and warned that Russia was “accumulating forces” in the direction of Kharkiv, Ukraine’s second-largest city.

“Fierce fighting continues in the Donbas. The Russian army uses the most artillery there, the most of its offensive forces. But Severodonetsk, Lysychansk, Avdiivka, Krasnohorivka and other hottest spots are holding on. Our people are holding them. Our army is holding on. And I am grateful to everyone whose strength today is our victory tomorrow.”

Ukraine has long aspired to join the EU, the neighboring bloc to the west of the country. The move is bound to anger Russia, however, with President Vladimir Putin opposing the pro-Western direction that Ukraine’s leadership has taken in recent years.

NATO Secretary-General Jens Stoltenberg has warned that the West must prepare itself for a prolonged conflict between Russia and Ukraine.

“We must prepare for the fact that it could take years. We must not let up in supporting Ukraine.  Even if the costs are high, not only for military support but also because of rising energy and food prices,” Stoltenberg told the Bild am Sonntag newspaper this weekend.

An aerial view of completely destroyed settlements about 40 km from the Russian border, in Kharkiv, on June 12, 2022.

“If Putin learns from this war that he can simply carry on as he did after the 2008 war in Georgia and the occupation of Crimea in 2014, then we will pay a much higher price,” he added.

Strategists have warned that it’s likely the war in Ukraine will become a war of attrition.

These IPO babies have been thrown out with the bathwater, says BofA

From Elon Musk to Sam Bankman-Fried, a bad week for market geniuses