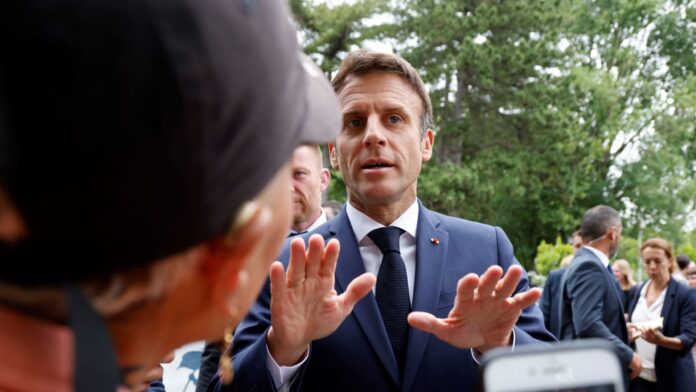 French President Emmanuel Macron might have been relieved after getting reelected in April — but his second term in office just got a lot more complicated.

His Ensemble! alliance has lost its absolute parliamentary majority of five years following a second round of legislative elections.

France’s President Emmanuel Macron speaks to fellow voters as he arrives to vote in the second stage of French parliamentary elections at a polling station in Le Touquet, northern France on June 19, 2022.

It was confirmed Monday morning that his centrist group secured 245 seats, falling short of the 289 needed to keep its dominance at the French National Assembly.

The next few hours — and likely days — will be dominated by political negotiations, with Ensemble! needing either a permanent or ad hoc partner to help it pass legislation.

The center-right political group Les Republicains could play a critical role in this, after winning 65 seats in parliament.

However, a coalition — an exception in France, which is usually led by one party — with the right could put pressure on the recently-appointed Prime Minister Elisabeth Borne, who’s perceived as too left-leaning by many on the right wing of the political spectrum.

On the left, an alliance between the Greens and other leftist groups, known as Nupes, won 131 seats in parliament, making it the biggest opposition force in the chamber.

This group, led by Jean-Luc Melenchon who heads a far-left party and opposes France’s participation in NATO, performed better than expected.

However, the view that France is shifting to the left was called into question by the performance of the far-right National Rally party, which increased its seats by six to a total of 89.

“We can’t say that President Macron has been rebutted, but there’s a bit of a warning there for sure. And it is going to be a hard one to pull,” Roland Lescure, lawmaker and spokesperson for Macron’s party told CNBC’s Charlotte Reed Sunday.

Macron was first elected in 2017 on a pro-reform agenda, but his vision to overhaul the pension system was pushed back, after protests and the coronavirus pandemic. As such, this is a priority for Macron in his second term — but parliamentary support will be crucial in getting it passed.

“Without a majority of his own, Macron will find it more difficult to pursue further reforms, including an increase in the retirement age from 62 to 64 or 65 years,” Holger Schmieding, chief Europe economist at Berenberg, said in a note Monday.

But he said that Macron will still likely be able to pass legislation on a case-by-case basis.

“At least, as importantly parliament will most likely not reverse his major signature reforms, labour market, corporate taxes, regulations, education, that have helped to turn France into the a better place to invest and create jobs,” Schmieding added.

Meta’s post-earnings decline could be a buying opportunity for long-term investors, analysts say