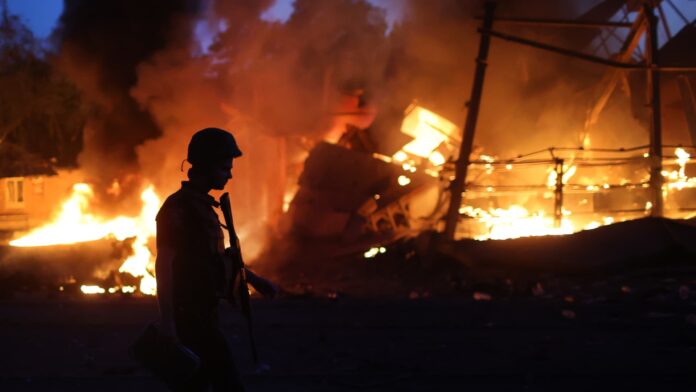 Russia’s ‘grinding and attritional’ tactics in the Donbas unlikely to change, UK says

Britain’s Ministry of Defense has said that Russian forces, having seized the Luhansk province in the Donbas after weeks of intense shelling, are likely to employ the same tactics to seize Donetsk

Britain’s Ministry of Defense has said that Russian forces, having seized the Luhansk province in the Donbas after weeks of intense shelling, are likely to employ the same tactics to seize Donetsk, which makes up the rest of the eastern region of Ukraine.

“The fight for the Donbas has been grinding and attritional and this is highly unlikely to change in the coming weeks,” the ministry said in its latest intelligence update on Twitter on Monday.

“Russia’s Ministry of Defence had earlier claimed to have completed the encirclement of Lysychansk and secured full control of the city,” the U.K. said of the weekend’s developments in the Luhansk. It added that “Russia’s focus will now almost certainly switch to capturing Donetsk Oblast, a large portion of which remain under the control of Ukrainian forces.”

The U.K. noted that the invasion is continuing to have a devastating impact on Ukraine’s agricultural sector, causing major disruption to the supply chains of seed and fertilizer which Ukrainian farmers rely on.

“Russia’s blockade of Odesa continues to severely constrain Ukraine’s grain exports. Because of this, Ukraine’s agricultural exports in 2022 are unlikely to be more than 35% of the 2021 total.”

“Following its retreat from the Black Sea outpost of Snake Island, Russia misleadingly claimed that ‘the ball is now in Ukraine’s court’ in relation to improving grain exports. In reality, it is Russia’s disruption of Ukraine’s agricultural sector which continues to exacerbate the global food crisis,” the ministry concluded.

89 Ukrainian athletes and coaches have been killed during the war, Zelenskyy says

President Zelenskyy described how the country’s sportsmen and women and have been affected by the war, with thousands of Ukrainian athletes unable to train, hundreds of sports facilities destroyed, and a large number killed in the fighting.

As many as 89 Ukrainian athletes and coaches have been killed since Russia invaded Ukraine, the country’s president told Thomas Bach, the president of the International Olympic Committee, on Sunday.

President Zelenskyy described how the country’s sportsmen and women and have been affected by the war, with thousands of Ukrainian athletes unable to train, hundreds of sports facilities destroyed, and a large number killed in the fighting.

“Many Ukrainian athletes joined the ranks of the Ukrainian Armed Forces to defend our country, to defend it on the battlefield. Some 89 athletes and coaches have been killed in hostilities. Thirteen were captured and are in Russian captivity,” he told Bach.

The IOC has offered a new support package for Ukrainian Olympians. The IOC’s Bach said his position was unchanged when it comes to Russian and Belarusian athletes being barred from participating in some international competitions held under the auspices of the IOC.

“The time has not yet come to lift such a ban,” Bach said.

Destruction from a missile attack in Bakhmut City, in the southeast of Kramatorsk and Sloviansk in the Donetsk region of the Donbas on July 3, 2022.

Russian forces have turned their attention to capturing more parts of the Donetsk region of the Donbas, with the province coming under heavy shelling on Sunday, according to the head of the province.

Pavlo Kyrylenko, the head of the Donetsk oblast (or province), said it was a “difficult Sunday in Donetsk region [with] rocket strikes and shelling throughout the region.”

He said the area’s largest cities — Kramatorsk and Sloviansk — were the most affected. Six people, including one child, were killed in Sloviansk after what Kyrylenko described as “massive shelling during the day.” Nineteen people were injured and multiple residential buildings were damaged.

Kramatorsk, meanwhile, was shelled by a Russian “Smerch” multiple launch rocket system, he said. “During the day they damaged a hotel and residential complex, in the evening they destroyed a road, targeted a school and the territory of a kindergarten and a clinic,” Kyrylenko said on Telegram in a post accompanied by images of heavily damaged and destroyed residential buildings.

The shelling in Kramatorsk left one person injured while in a residential area another person was killed.

“In just one day, the Russians killed at least 7 civilians and wounded at least 20 in Donetsk region,” Kyrylenko said. CNBC was not able to immediately verify the information.

‘We will return’ to captured Lysychansk, Zelenskyy says

Plumes of smoke rising to the sky during heavy fighting between Ukrainian and Russian forces in Lysychansk, Ukraine, on July 1, 2022. Russia claimed it had captured Lysychansk on Sunday, a development later confirmed by Ukraine.

Ukraine’s President Zelenskyy conceded on Sunday that his forces have had to retreat from the city of Lysychansk in the Luhansk province in the eastern Donbas region, but vowed to return to the area.

“If the commanders of our army withdraw people from certain points at the front, where the enemy has the greatest advantage in fire power, and this also applies to Lysychansk, it means only one thing,” he said in his nightly video address.

“That we will return thanks to our tactics, thanks to the increase in the supply of modern weapons.”

Zelenskyy said Russia had enough multiple rocket launch systems to destroy “city after city in Ukraine” and that the reality is that “they have gathered most of their firepower in Donbas.”

The president defended the decision to prioritize lives over land, noting: “The fact that we protect the lives of our soldiers, our people, plays an equally important role. We will rebuild the walls, we will win back the land, and people must be protected above all else.”

Russia claimed it had captured Lysychansk on Sunday, a development that was later confirmed by Ukraine. Russian forces now control the Luhansk region and are expected to now focus on capturing more territory in Donetsk. Russia has said its main aim in the war is to “liberate” the Donbas region in east Ukraine where two breakaway pro-Russian, self-styled “republics” are located.