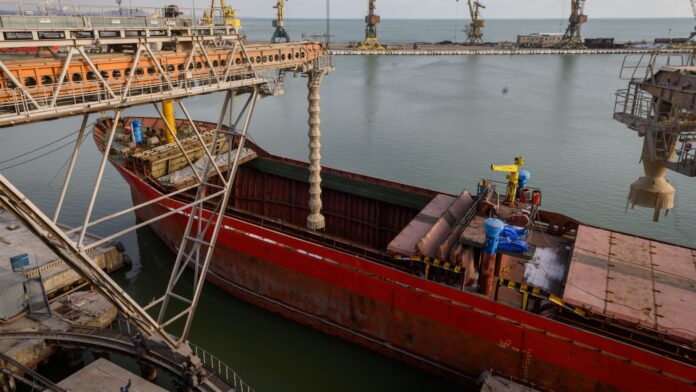 A farm implement harvests grain in the field, as Russian-Ukrainian war continues in Odesa, Ukraine on July 04, 2022.

A U.N.-backed deal to resume exports of Ukrainian grain could be signed on Friday, easing a global food crisis caused by the conflict in Eastern Europe.

The signing is reportedly due to be held at Istanbul’s Dolmabahce Palace in Turkey, with the spokesperson for Turkish President Recep Tayyip Erdogan telling reporters Thursday that Russia and Ukraine had come to an agreement.

International onlookers are cautious on the deal and Russia will be closely watched to make sure it upholds its side of the agreement. Grain exporters in the Ukrainian port city of Odesa have been unable to export their goods due to the war, fueling a global shortage of the commodity and pushing up food prices.

The agreement will reportedly allow Ukrainian vessels to guide ships through mined waters, with a localized truce in place so Russia does not attack. Turkish officials are also expected to inspect the shipments to rule out any weapons smuggling.

Moscow, which blames Ukraine for laying the mines, is also expected to restart its own grain exports in the Black Sea under the agreement.

Russian President Vladimir Putin gives a speech in front of the monument “Fatherland, Valor, Honor” near the headquarters of the Foreign Intelligence Service of the Russian Federation (SVR), in Moscow, Russia June 30, 2022.

For months, Russian warships have blocked Ukrainian ports on the Sea of Azov and the Black Sea.

“To date, Russia has weaponized food during this conflict. They have destroyed agricultural facilities they prevented millions of tons of Ukrainian grain from getting to those who need it,” State Department spokesman Ned Price said during a daily press briefing.

“It is a reflection of Russia’s disregard for lives and livelihoods not only in the region but well beyond that,” he added.

Price’s comments come on the heels of an announcement that the United Nations, Turkey, Russia and Ukraine will soon sign an agreement that will usher in a sea corridor for Ukrainian grain exports.

“We should never have been in this position in the first place. This was a deliberate decision on the part of the Russian Federation to weaponize food,” Price said.

Ukrainian First Lady Olena Zelenska arrives to give an address to members of the United States Congress at the US Capitol in Washington, DC, on July 20, 2022.

Ukraine’s first lady Olena Zelenska met with representatives from HP and the Global Business Coalition for Education this week to accept a donation of computers for children, students and healthcare providers in Ukraine.

“We are very grateful for HP’s and the Global Business Coalition for Education’s support,” Zelenska wrote in a statement about the $30 million HP initiative. “Their efforts and contribution will help students in Ukraine and beyond continue learning and prepare for the future, like any other youth in the world,” she added.

Enrique Lores, CEO of HP, said that the Palo Alto-based company would continue to mobilize tech resources for Ukraine.

“Through our partnership with the Global Business Coalition for Education, we will put personal computers in the hands of students and families who have been displaced from their homes and classrooms,” Lores wrote in a statement.

Malaysia heads to the polls on November 19