HomeInvestingThe strong dollar could take a bite out of earnings and analysts...
Investing 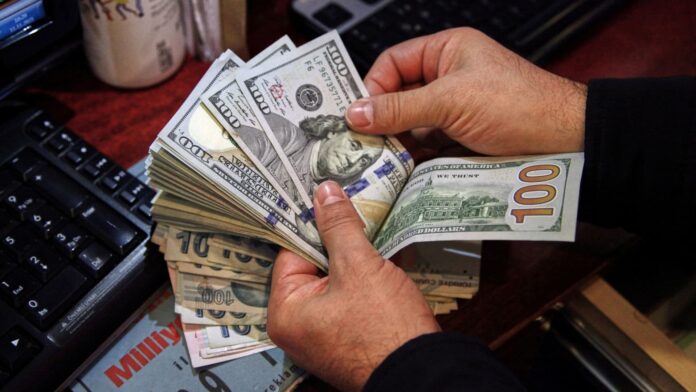 The surging dollar may have dented the foreign profits of multinational companies and shaved a few percent off of S & P 500 earnings gains. Some high profile companies have already reported results are being hit by the rising dollar. Microsoft warned in an announcement in early June that its fiscal fourth quarter revenues and earnings would be impacted by foreign exchange. The software giant will report those earnings July 26. This week, both IBM and Johnson and Johnson said the strong dollar was biting into their profits. IBM earnings beat expectations this week, but it lowered its guidance for free cash flow from $10 billion for all of 2022, in part due to the greenback. Johnson and Johnson cut its full year outlook based on currency impact. Analysts say the companies most likely to see some hit from the dollar’s 12% rally this year so far are multinationals, mostly technology firms, but also consumer staples and pharmaceutical names. “We have said on average the hit to earnings is 20 to 30 basis points to earnings for every 1% move in the dollar,” said Julian Emanuel, head of equities, derivatives and quantitative research at Evercore ISI. He added that 30% of S & P earnings are derived from foreign sources. Emanuel recently cut his 2022 estimate for S & P 500 earnings per share to $221.50, from $226. “Combined with a stronger [dollar], labor market strain, supply chain issues, and inventory builds in a deglobalizing world, margins and EPS are under pressure as prospective recession scenarios develop,” he noted. Not in the estimates Brian Rauscher, Fundstrat head of global portfolio strategy and asset allocation, said a rough calculation of the impact on second quarter results would put the hit to profits at about 3% to 5%, based on a 14% year-over-year second quarter increase in the dollar. The trend will also continue next quarter, he added. “The dollar is a headwind. I don’t think it’s in the estimates,” said Rauscher. “Once it gets in the estimates, we’ll reflect it and then it might not be an issue.” S & P 500 profits are expected to be up 5.9%, based on estimates and actual reports, according to I/B/E/S data from Refinitiv. Of the 60 companies that reported as of Wednesday morning, 78.3% beat estimates. Rauscher said so far, only a handful of companies have announced or pre-announced because of currency. “Coming into the earnings season, the dollar was up 16% year-over-year. That’s not small,” said Rauscher. He said the dollar should be peaking now, since the dollar bottomed last year between the end of May and middle of June. “So peak pain is right now in July. This is impacting next quarter’s earnings,” he said. Rauscher described the dollar threat as a “medium” problem for companies. “Will it cause companies’ earnings to crater? No.” “Estimates are too high. They need to be reflected lower and based on my research, I don’t think it’s in the pricing yet. Once this adjustment works its way through, which will take some time and run concurrently with the Fed tightening, markets have formidable headwinds, to say the least,” he said. Winners and losers Not all companies with overseas sales will take the same hit, since currency exposure is hedged. There are also positives from a strong dollar, including lower costs from foreign operations and other inputs. For retailers, the dollar strength may be a positive since foreign-sourced goods would be bought with a stronger currency and sold to American consumers, who pay in dollars. “Our view is that the market is going to be more tolerant of currency impact from stocks that have lagged and have upward earnings revisions, as opposed to being intolerant of stocks that have outperformed and have had downward earnings revisions,” said Emanuel. Emanuel had issued a list of companies on July 10 that were performing well but were flagged for downward earnings revisions. On that list were IBM and Johnson and Johnson. Other companies with foreign sales on that list include Keurig Dr. Pepper and Kimberly Clark. Both of those companies report earnings next week. “This is a tactical bear market rally, and the market has unfinished business on the downside, and earnings to me is one of the bigger components,” Rauscher said.