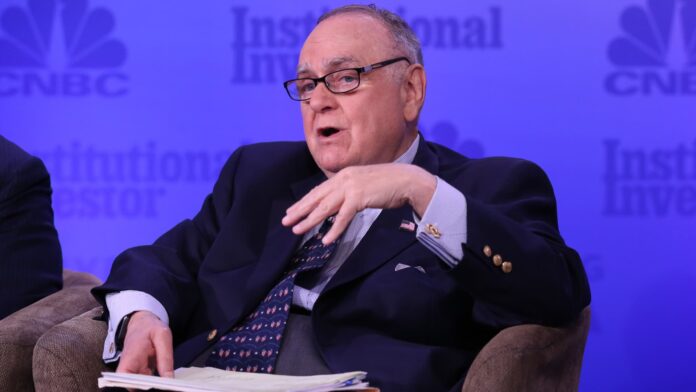 Billionaire investor Leon Cooperman cautioned that the final bottom of the stock market is yet to come as the economy is poised to hit a recession next year. The chair and CEO of the Omega Family Office said the market is in a seasonally strong period, but an unfavorable macro environment — the Federal Reserve’s aggressive rate hikes, a strong dollar and high oil prices — will still cause a major economic downturn in 2023. “I think we are in a rallying mode seasonally but I still have a cautious view,” Cooperman said Tuesday on CNBC’s ” Squawk Box .” “My cautious view is underpinned by the idea that I think the combination of Fed tightening, QT, strong dollar with the price of oil, will create a recession in the second half of 2023.” “The market generally drops around 35% from the peak in response to a recession. I find many things to do but I really don’t like the S & P that much,” Cooperman said. “I don’t think the final lows have been hit.” The market pulled off a big rebound in October with the Dow Jones Industrial Average notching its best month since January 1976. The S & P 500 rallied 8% in October. Investors jumped back in the market in hopes that inflation may be peaking and the Fed could break from its trend of 75 basis point rate hikes after the November meeting. The widely followed investor said the S & P 500 could tumble to the low 3,000s some time next year. He said he remains a long-term bear because the nation is following ” inappropriate” fiscal and monetary policies that pulled demand forward and created an artificial situation in the economy. Cooperman said individual stocks could still offer value, but the benchmarks are becoming stagnant. He highlighted car dealership Lithia Motors as one of the names he likes. “I believe the action is going to be in the individual stocks, not the averages,” Cooperman said. “I would advise people to go out and get a good quality money manager who can go both ways — and I mean by that, is long and short. I don’t think the averages are going anywhere, but I believe there are a lot of cheap individual stocks around.” Energy still cheap? The investor said his portfolio, which is up slightly on the year, is 22% energy. Cooperman said he grew concerned that the sector has become too popular over the past year. “A year ago, I [was] overweight energy, very few people liked it. Now I listen to your program and everybody talks about energy on the plus side,” Cooperman said. “I worry that I have a lot of company and they are up a lot. They still seem cheap.” The S & P 500 energy sector is the only grouping in the green this year, rallying more than 60%. Cooperman revealed that he owns Canadian oil and gas producer Paramount Resources , and he is not selling energy stocks despite the big run-up.