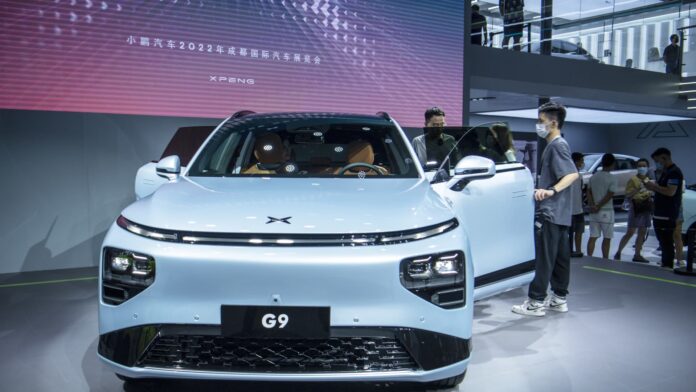 Xpeng said deliveries of its newly launched G9 SUV surged in October from September, despite a drop in the brand’s overall monthly deliveries.

BEIJING — Chinese electric car startup Xpeng delivered about half the number of cars that rivals Nio and Li Auto did in October, according to company statements Tuesday.

While the two other startups reported monthly deliveries of more than 10,000 each, Xpeng said it delivered just 5,101 cars — a third-straight month of decline.

Xpeng said mass deliveries of the G9 began on Oct. 27. The company has said it expects the new model to become its best-selling car next year.

Nio, which has targeted a higher price range for both SUVs and sedans, said it delivered 10,059 vehicles in October. That marked a slight decline from September, but marked a fifth-straight month of deliveries that topped 10,000.

“Vehicle production and delivery were constrained by operation challenges in our plants as well as supply chain volatilities due to the COVID-19 situations in certain regions in China,” Nio said in a press release.

The company said its October deliveries included vehicles sold in Europe, but not those offered under a local subscription program.

Li Auto delivered 10,052 vehicles in October. Since May, the company has delivered more than 10,000 cars every month, except in August.

After having only one model on the market since 2019, Li Auto has launched three new models in the last few months — the L9 which began deliveries in August, the L8 which is set to begin deliveries this month and the L7 which is set to reach consumers early next year.

Unlike Xpeng and Nio, Li Auto’s vehicles are not purely electric as they come with a fuel tank to charge the battery and extend driving range.

Among the three companies, Li Auto’s U.S.-listed shares have held up the best in a year of broad market declines. The stock is down by about 55% so far this year, while Nio shares have dropped by 69% and Xpeng is down by 87%.

Goldman says own these stocks with corporate profitability under siege