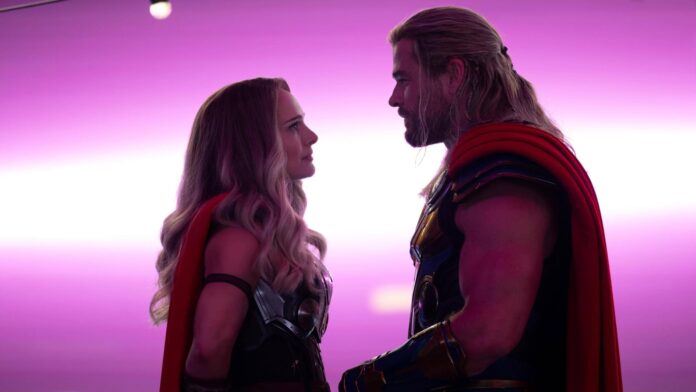 With “Thor: Love and Thunder” zapping up an estimated $143 million during its domestic weekend, box office analysts feel confident that movie theaters are no longer on the road to recovery and have reached a pace of normalcy seen in pre-pandemic times.

Over the weekend, the newest entrant in Disney’s Marvel Cinematic Universe tallied $159 million internationally, bringing its global haul to $302 million.

“Marvel fans turned out in force yet again this weekend as ‘Thor: Love and Thunder’ followed the success of Minions last week to combine for the first pair of $100 million openers on consecutive weekends since 2018,” said Shawn Robbins, chief analyst at BoxOffice.com.

“Thor: Love and Thunder” is estimated to have drawn in more than 10 million moviegoers this weekend, about 57% of all cinema patrons, according to data from EntTelligence.

With continued ticket sales for movies like Paramount and Skydance’s “Top Gun: Maverick,” Universal’s “Minions: The Rise of Gru” and “Jurassic World: Dominion” as well as Pixar’s “Lightyear” and Warner Bros.’ “Elvis,” this weekend’s domestic box office will rake in well over $200 million, if not closer to $250 million.

“It’s noteworthy that this weekend will reflect a level of normalcy at the box office that has been building since the beginning of the summer movie season with a diverse selection of hits from the superhero, action, comedy, family, indie, and horror genres that are now joined by ‘Thor: Love And Thunder,'” said Paul Dergarabedian, senior media analyst at Comscore.

Those films generated $185 million during that weekend, a sum that will “easily be beaten by this weekend’s overall lineup as ‘Thor: Love and Thunder’ hammers out another solid Marvel debut,” he said.

While the overall number of wide releases in 2022, is down more than 30% compared to 2019, Dergarabedian said this year’s box office is hitting its stride.

“Perhaps we can finally proclaim that the industry is not on the ‘road’ to recovery but has finally ‘arrived’ at a destination of normalcy that has been a long time coming for movie theaters,” he said.

Disclosure: Comcast is the parent company of NBCUniversal and CNBC. NBCUniversal distributed “Minions: The Rise of Gru,” “Jurassic World: Dominion” and “Yesterday.”