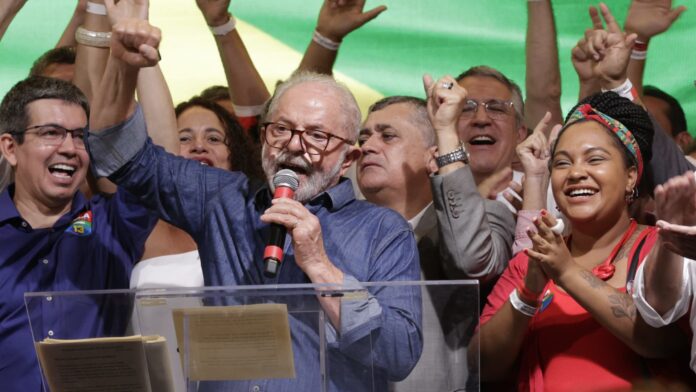 Da Silva, commonly known as Lula, took 50.9% of the second round vote to incumbent Jair Bolsonaro’s 49.1%, according to Brazil’s election authority.

The 77-year-old leftist campaigned on policies including exempting the lowest earners from income tax, raising the minimum wage and upping investment in public services to create new jobs. He has vowed to reduce poverty and boost economic growth, citing his record of doing so when he served two terms as president from 2003 to 2010.

The remarkable political return comes after he was jailed in 2017 on money laundering and corruption charges that were overturned in 2019.

“It’s a significant change, I can’t emphasize how much things will be different in this country with Lula’s election,” James Green, professor of Latin American History at Brown University, told CNBC’s “Squawk Box Europe” Monday, citing planned increases in welfare provision, more public-inclusive decision making, and the return of a “government of transparency.”

Lula used his victory address to pledge to combat climate change and deforestation — issues observers say have not just been sidelined but severely worsened under Bolsonaro’s tenure.

Deforestation in the Brazilian Amazon rose to an all-time high in the first half of 2022 and was 80% higher than the same period in 2018, the year before Bolsonaro took office, according to a report by the Amazon Environmental Research Institute.

Bolsonaro has been criticized for enabling the proliferation of illegal activity in Brazilian rainforests — including land grabs and violence against indigenous people and campaigners — through funding cuts to on-the-ground law enforcement; slashing the national environment agency’s budget; seeking to overturn environmental regulations; approving thousands of new pesticides; and appeasing the country’s powerful agricultural businesses by failing to act on encroachment onto protected lands.

Brazil has also failed to detail plans to cut carbon emissions in line with international agreements, according to Human Rights Watch, and its emissions from agriculture and cattle-raising have risen to the highest level on record.

Bolsonaro’s office was not immediately available for comment when contacted by CNBC. Bolsonaro has previously said he was taking action to protect the rainforest; but he has also defended the expansion of mining projects, while also accusing foreign governments and the media of exaggerating the damage being done. In 2019, he told foreign journalists: “No country in the world has the moral right to talk about the Amazon. You destroyed your own ecosystems.”

Organized crime has taken hold of several areas of the Amazon during Bolsonaro’s presidency, with many illegal miners and land grabbers seeing him as an ally, Carlos Rittl, international policy advisor and Brazil specialist at Norwegian NGO Rainforest Foundation, told CNBC on a call.

“Around 95% of deforestation in the last four years in the Amazon has had some level of illegality,” he said. “Areas that should have remained as forest have become private land, indigenous land has been invaded. It has reached this level because of the inaction of the government.”

“If we take a look at the promises Lula has made, including in his victory speech last night, he was addressing several major problems but also net zero deforestation, protecting indigenous people’s rights,” Rittl continued.

“We can expect him to re-strengthen the environmental agency and recover the budget to allow them to act against environmental crimes” — but only so long as he “walks the talk,” Rittl said.

It won’t be easy or immediate, he added, for a variety of reasons. A 2023 budget has already been agreed and systems have to be rebuilt and put to work. Lula will be seeking consensus in a strongly divided country and political system. And things have changed since his previous term (when annual deforestation of the Amazon plunged from 25,396 sqkm in 2003 to 7,000 sqkm in 2010) due to higher levels of organized crime with a strong foothold.

International cooperation on these efforts will be important, Rittl added. Norway is already looking to resume aid for anti-deforestation efforts to Brazil, which it suspended during Bolsonaro’s term, local newspaper Aftenposten reported Monday.

A further challenge is the pressure on Lula to start delivering on the economy, job creation and poverty alleviation, themes he became known for during his previous term.

Brazil’s economy has stuttered over the last decade, falling into a deep recession 2015 and 2016 which was followed by a period of political instability. It was also heavily hit by the coronavirus pandemic, when its population suffered one of the world’s worst death tolls and inequality increased, according to think tanks. Inflation is set to average 5.8% this year and interest rates are near 14%.

Meanwhile, described by some commentators as socially rather than economically right wing, Bolsonaro also leaves behind various subsidy and unfunded spending programs that have added to Brazil’s high levels of debt, which Brown University’s James Green called a “series of time bombs.”

However, the Brazilian real has been among the only currencies to outperform the U.S. dollar this year due to commodities demand, central bank tightening and the economy’s distance from volatility such as the war in Ukraine.

It remains to be seen how international investors will respond to the return of a Lula presidency, especially one with significant spending pledges to fulfil, and where he will take Bolsonaro’s planned pro-market reforms and privatizations.

The real dropped 2% on the news, before trimming losses, and shares in U.S.-listed Brazilian companies, including oil giant Petrobras, fell in pre-market trading.

The immediate concern for markets and also Brazilians and the international community is political stability during the handover of power, which is set to take two months.

There are still questions over whether Bolsonaro will challenge the election outcome. He could also seek to block a smooth transition, Green noted.

And if he has set ambitious goals to cut deforestation to zero and review emissions targets in line with the Paris Agreement, Lula has also acknowledged oil will be necessary for some time and would oversea an increase in oil and gas production, Climate Home News reports.

Brazil has a relatively clean domestic energy supply, with nearly half of its power coming from renewable sources. But it is also a major oil producer, with its crude oil exports providing a key income source along with soaring commodities demand during Lula’s previous terms.

Rittl said there was potential for an even greater shift toward renewable energy domestically.

Beyond that, he continued: “We need to see finance for agriculture that is linked to emissions reduction, protecting the environment, controlling fertiliser use and managing cattle. Brazil needs mandatory emissions reductions standards and an updated plan to fulfil them.”

“It needs economic policies that are aligned with climate policies to make sure that infrastructure, agriculture and industry are all drivers for change in Brazil,” Rittl added.

Jim Cramer says ‘exhausted’ sellers are behind the market’s strength