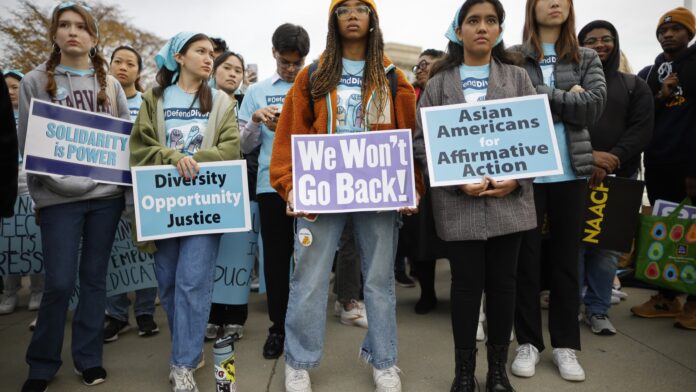 The Supreme Court began hearing arguments Monday in two cases that challenge the use of race-based considerations to determine who gets admitted to American colleges.

The arguments, which are expected to continue for several hours, stem from lawsuits against affirmative action in admissions at Harvard University and the University of North Carolina.

“Racial classifications are wrong,” the attorney Patrick Strawbridge said in his opening argument on behalf of the group Students for Fair Admissions.

“This court has always said that racial classifications are invidious,” Strawbridge responded to Justice Clarence Thomas, a conservative who asked about defenders of affirmative action who say that taking race into account tells something about the “whole person” seeking admission to college.

Students for Fair Admissions is seeking to overturn the Supreme Court’s ruling in the case Grutter v. Bollinger, which in 2003 found that colleges could consider race in their admissions in order to have diverse campuses.

Justice Sonia Sotomayor noted that the 14th Amendment, adopted after the Civil War, took race into account to help Black Americans get access to parts of society that were denied them during slavery.

“You’re assuming that race is the only factor that gets someone in,” said Sotomayor, a liberal justice referring to college admissions.

Strawbridge later said that Asian applicants have been disadvantaged by affirmative action policies that have benefited Black applications, a factor which he argued underscored the unfairness and unconstitutionality of those policies.

Strawbridge said the use of race to determine who gets into a college is “inherently divisive.”

Sotomayor challenged Strawbridge to come up with any example in the court record where an applicant had gotten into college simply because of their race.

She and other liberal justices in their questions argued that race was but one of many factors in affecting how colleges determine who gets admitted.

One of that justices, Ketanji Brown Jackson, said “They’re looking at the full person, with all these characteristics.”

Conservatives hold a 6-3 super-majority on the Supreme Court and are expected to be open to the arguments for ending affirmative action.

Biogen’s Alzheimer’s drug could be more competitive than peers, Stifel says in upgrade to buy

Disney CEO Bob Chapek wants to own all of Hulu, says chances of early deal are slim