HomeInvestingMajor analysts are talking about Robinhood's third-quarter results. Here’s what they said
Investing

Major analysts are talking about Robinhood’s third-quarter results. Here’s what they said 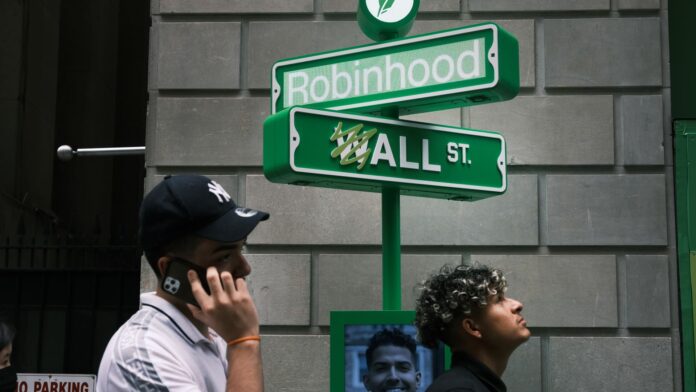 Wall Street analysts are impressed with Robinhood after it posted strong results for the latest quarter that showed a boost from interest rates and lower expenses. On Wednesday, the investing app operator reported a narrower-than-expected loss of 20 cents per share for the third quarter. That was better than the 31-cent-per-share loss forecasted by Wall Street, according to Refinitiv. Net revenue came in at $361 million, compared to the $355 million analysts expected. Analysts cheered the results and highlighted the company’s new products and revenue streams. The growth opportunity from here is the company’s next big hurdle, however, and the Street is mixed on how to value Robinhood given its headwinds. The shares are currently down 29% for the year. Growth for Robinhood has reversed as the pandemic boom in retail trading lost steam and investors wait out the market tumult of 2022. In August, the fintech company announced a 23% reduction in its headcount as it reported weaker-than-expected results for the second quarter . Here’s what analysts said about Robinhood: Key Bank – Overweight, price target $13 “While we do not expect the journey to be linear… following a ~17x fold increase in users the last 4 years, we believe Robinhood is poised to become a FinApp leader in part because of: 1) strong engagement estimated at > 40% DAU:MAU; 2) rapid uptake of new products like Cash Management, which scaled in ~2 years to 5M+ users; and 3) strong track record of innovation (e.g., self-clearing, microservices architecture) supporting a path to ~$2B of revenue with an ARPU of ~$90 as MAUs approach mid-20Ms in 2022.” JMP Securities – Outperform, price target $28 “We are pleased with the results and actions the company continues to take to improve the firm’s positioning and reshift toward offense, and accordingly, we view the risk/reward as compelling at just ~1.8x our 2023E revenue, with material upside to come as growth improves.” Goldman Sachs – Neutral, price target $13 “While we believe the improvement in profitability is a very good step forward, we believe investors need to have greater visibility towards a resumption of organic growth in order for the shares to materially outperform. That said, with the company’s cash position and tangible book value likely having reached a trough, we see solid valuation support and limited downside at current levels.” Morgan Stanley – Equal-weight, price target $12 “3Q’s profitability inflection should enhance investor confidence in management strategy and signal potential change in sentiment among investors who viewed losses as critical investment hurdle. However, user growth and engagement challenges remain against unfavorable macro.” Deutsche Bank – Hold, price target $11 “Quite positively, the company achieved adjusted EBITDA profitability a quarter ahead of its target… This said, the sustainability and growth of adjusted EBITDA are the next hurdles, which we think will take time as the company builds out its growth initiatives (likely reinitiating expense growth). Key factors will be growing customer usage, driving continued net interest revenue expansion, maintaining transaction revenue above 3Q levels, while demonstrating measurable traction on a long list of growth initiatives.” Piper Sandler – Neutral, price target $11.50 “Our price target multiple increase is driven by our increased confidence in HOOD’s leaner expense model & given it achieved adjusted EBITDA profitability a quarter earlier than expected. We reiterate our Neutral rating, as we would like to see a turn around in MAU growth, a more convincing pick up in trading volumes, and/or successful new product roll-outs (which would drive improved valuations) to become more optimistic on HOOD, though we acknowledge the progress that has been made.” Barclays – Underweight, price target $11 “Q3 revenues beat, driven by higher net interest income, and costs came in well below expectations, driving adj. EBITDA of $47M (and turning positive earlier than expected). That said, transaction revenues missed, and MAUs fell in September.” — CNBC’s Michael Bloom contributed reporting.

An often-overlooked economic measure is signaling serious trouble ahead