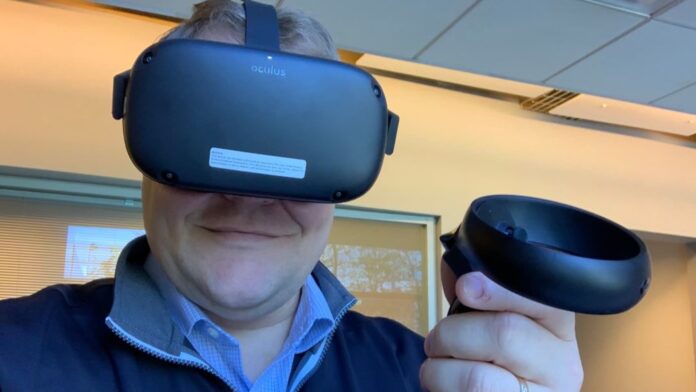 The Facebook Oculus Quest VR headset is comfortable and easy to use.

Speaking on an episode of the Joe Rogan Experience podcast that was published Thursday, the Facebook founder said that Meta’s next VR headset will contain new features intended to help users experience a feeling of “social presence.”

The new VR headset will contain more cutting-edge eye- and facial-tracking features, Zuckerberg said. These features will make it possible so that when people smile or frown, their digital avatars will do the same in virtual reality, he explained.

Although Zuckerberg did not refer to the name of the headset, it’s likely that the device he discussed was Meta’s upcoming headset that’s currently dubbed Project Cambria. That VR headset will cost at least $800, significantly more than its flagship Quest 2 VR headset, which costs $399 or $499 depending on the model. The company recently raised the price of that device, attributing it to rising shipping and production costs.

Meta has been investing heavily into VR and its sibling technology augmented reality as it pushes the idea of the metaverse as being the next evolution of how people interact with computers. But it will likely be years before the company stems its hefty financial losses related to its metaverse investments, housed under Meta’s Reality Labs business unit.

Zuckerberg also contrasted the user experience of Instagram against rival Twitter, which is in a legal fight with Tesla CEO Elon Musk over his attempt to back out of buying the social media company.

“You get all these people who are super witty and are saying super insightful things, but a lot of them are very cutting,” Zuckerberg said. “I find that it’s hard to spend a lot of time on Twitter, without getting too upset.”

Earlier this week, a former security chief at Twitter filed whistleblower complaints accusing the company of misleading board members, users, and shareholders about the company’s security practices and methods.

Watch: What is the metaverse and why are billions of dollars being spent on it?

In 5 key battlegrounds, most GOP nominees are election deniers