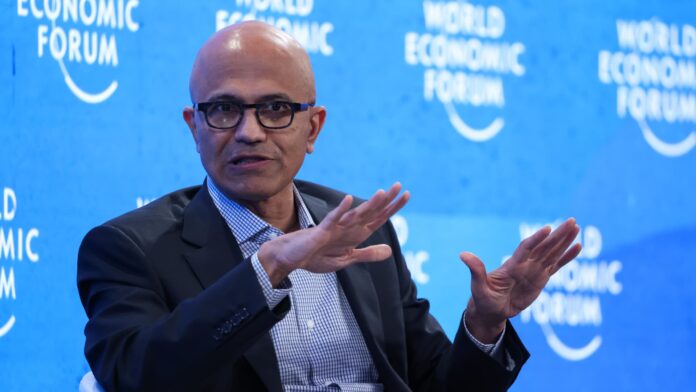 Satya Nadella, chief executive officer of Microsoft Corp., speaks during a panel session on day two of the World Economic Forum in Davos, Switzerland, on May 24, 2022.

Microsoft said Tuesday it cut a small number of workers, days after the software maker began its 2023 fiscal year, a time when the company normally announces structural changes.

Technology companies big and small have slowed hiring plans or announced reductions in the workforce in recent months to withstand a possible economic recession, which central bankers have been trying to ward off by raising interest rates. That shift has made investors less interested in growth-oriented stocks such as Microsoft, whose shares have declined about 22% since the start of the year, while the larger S&P 500 index is down 19% over the same period.

The cuts reach a variety of groups and affect less than 1% of the company, which employed 181,000 people as of June 2021, the company said.

“Today we notified a small number of employees that their roles have been eliminated,” a Microsoft spokesperson told CNBC in an email. “This was a result of a strategic realignment, and, like all companies, we evaluate our business on a regular basis. We continue to invest in certain areas and grow headcount in the year ahead.” Bloomberg reported on the move earlier.

The Microsoft executive in charge of Office productivity software, Rajesh Jha, in May told his team to obtain permission before opening new roles. In June, Microsoft slashed its income and revenue guidance, citing unfavorable foreign-exchange rates.

Microsoft last announced a round of layoffs in 2017, after the start of its new fiscal year. The company trimmed thousands of employees as it adjusted its approach to selling.

Facebook parent Meta Platforms decreased its target for adding software engineers this year from 10,000 to around 6,000 to 7,000, Reuters reported last week. Amazon’s retail division decreased its 2022 hiring goal as well, Insider reported in May.

The Army has so far recruited only about half the soldiers it hoped for fiscal 2022, Army secretary says