Next winter will be more challenging, oil CEOs warn 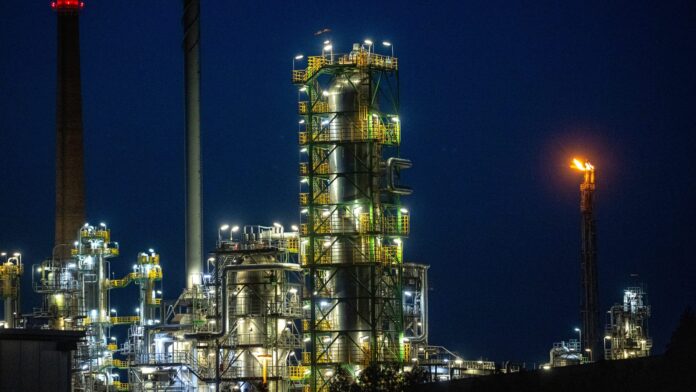 PCK Schwedt oil refinery in Schwedt, Germany on Monday, May 9, 2022.

ABU DHABI, United Arab Emirates — Politicians and governments around the world are bracing for potential civil unrest as many countries grapple with mounting energy costs and rising inflation.

The global economy is facing an onslaught from multiple sides — a war in Europe, and shortages of oil, gas and food, and high inflation, each of which has worsened the next.

Concerns are centered on the coming winter, especially for Europe. Cold weather, combined with an oil and gas shortage stemming from Western sanctions on Russia for its invasion of Ukraine, threatens to upend lives and businesses.

But as much concern as there is ahead of this winter, it’s really the winter of 2023 that people should be worried about, major oil and gas executives have warned.

Energy prices “are approaching unaffordability,” with some people already “spending 50% of their disposable income on energy or higher,” BP CEO Bernard Looney told CNBC’s Hadley Gamble during a panel at the Adipec conference in Abu Dhabi.

We are in good shape for this winter. But as we said, the issue is not this winter. It will be the next one, because we are not going to have Russian gas.

But through a combination of high gas storage levels and government spending packages to subsidize people’s bills, Europe may be able to manage the crisis this year.

“I think it has been addressed for this winter,” Looney said. “It’s the next winter I think many of us worry, in Europe, could be even more challenging.”

The CEO of Italian oil and gas giant Eni expressed the same worry.

For this winter, Europe’s gas storage is around 90% full, according to the International Energy Agency, providing some assurance against a major shortage.

But a large proportion of that is made up of Russian gas imported in previous months, as well as gas from other sources that was easier than usual to buy since major importer China was buying less due to its slower economic activity.

“We are in good shape for this winter,” Eni chief Claudio Descalzi said during the same panel. “But as we said, the issue is not this winter. It will be the next one, because we are not going to have Russian gas – 98% [less] next year, maybe nothing.”

This could lead to serious social unrest — already, small to medium-sized protests have cropped up around Europe.

Anti-government protests in Germany and Austria in September and in the Czech Republic last week — the latter of which has seen household energy bills surge tenfold — may be a small taste of what’s to come, analysts have warned. Some energy executives agreed.

Yes, there is a real risk that governments without a steady hand on policy shaping in Asia can deal with unrest.

“We’ve seen that any shocks to the price at the pump, or something as simple as LPG [liquefied petroleum gas] for cooking, can cause unrest,” the CEO of Malaysian oil and gas company Petronas, Datuk Tengku Muhammad Taufik, said.

He described how a strengthening dollar and rising fuel prices pose a serious risk to many Asian economies – massive populations that are some of the biggest oil and gas importers in the world. And this is happening while subsidies are already in place to help ease prices for citizens.

Many Asian economies were already reeling from the pandemic, which caused “vast swaths of [small and medium enterprises] in Asia to just collapse,” Taufik said. “So, yes, there is a real risk that governments without a steady hand on policy shaping in Asia can deal with unrest.”

Much of the anger of protesters is also directed at the energy companies, which have been making record profits as bills get higher and higher.

Responding to this, many of the CEOs who spoke to CNBC said it’s an issue of market supply and demand, and that it’s up to governments to implement policies more conducive to energy investment. That investment, they stressed, has taken a hit in recent years as countries push for the transition to renewables.

The world has to face “the practicalities and realities of today and tomorrow,” BP’s Looney said, stressing the need to “invest in hydrocarbons today, because today’s energy system is a hydrocarbon system.”

Many policymakers and institutions still decry the use of fossil fuels, warning the far bigger crisis is that of climate change. In June, United Nations Secretary General Antonio Guterres called for abandoning fossil fuel finance, and called any new funding for exploration “delusional.”

The oil executives argued that this approach simply isn’t realistic, nor is it an option if countries want economic and political stability.

At the same time, however, they admitted that the energy transition itself does need greater focus and investment in order to avert a larger crisis next year and beyond, when there is no Russian gas in storage and other options are increasingly expensive.

“In Europe, we pay at least six, seven times to [as much as] 15 times the energy costs with respect to the U.S.,” ENI’s Descalzi said.

“So what we have done in Europe, each country, gave incentive subsidies to try to reduce the cost for industry and for citizens. How long that can continue?” he asked.

“I don’t know, but it’s impossible that it can continue forever. All these countries have a very high debt,” he said. “So they have to find a structural way to solve this issue. And the structural way is what we said until now — we have to increase and be faster on the transition. That is true.”

“But,” he added, “we have to understand, from a technical point of view, what is affordable and what is not.”