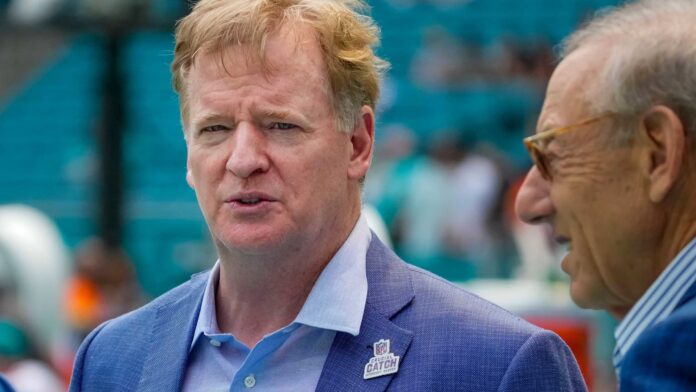 NFL Commissioner Roger Goodell during the NFL Football match between the Miami Dolphins and Indianapolis Colts on October 3rd, 2021 at Hard Rock Stadium in Miami, FL.

The National Football League plans to select a streaming service as its new Sunday Ticket partner and will choose a winner by the fall, Commissioner Roger Goodell said Friday.

“I clearly believe we’ll be moving to a streaming service,” Goodell told CNBC’s Julia Boorstin in an exclusive interview at the Allen & Co. Sun Valley conference. “I think that’s best for consumers at this stage.”

Apple, Amazon and Disney, which owns ESPN+, have all submitted bids to be the league’s exclusive Sunday Ticket distributor, CNBC reported last month. Goodell confirmed discussions have been going on for over a year to find a new partner to replace DirecTV, whose contract with the league ends after this season.

Sunday Ticket is the only way fans can watch live NFL Sunday afternoon games outside of what’s broadcast in their local markets on CBS and FOX. DirecTV paid $1.5 billion for annual rights. The NFL now wants more than $2 billion a year, CNBC reported.

Contractual language with CBS and Fox would prevent any streaming service from charging fans significantly less than the current $300 cost for Sunday Ticket, CNBC reported.

DirecTV isn’t bidding to renew the package but is willing to partner with the winner, CNBC reported. In its current arrangement with the NFL, DirecTV mandates customers who sign up for Sunday Ticket also sign up for its pay-TV service, with rare exceptions. That requirement will go away with a new streaming service partner, potentially opening up Sunday Ticket to a much wider audience.

Goodell noted that many people who watch games on a streaming service don’t subscribe to traditional pay TV, allowing the league to capture a wider audience by moving Sunday Ticket to a digital provider.

“We really believe these new platforms give us an ability to innovate where we are today,” said Goodell. “It obviously makes it more available to our consumers, particularly the younger demographic, which is one that we really want to get to. I think this will make it more accessible for fans. I think it will be a better experience for fans.”

Goodell also confirmed the league will be launching its own streaming service, called NFL+, in time for the upcoming season in September. He didn’t provide details on pricing or what will be available on the service, but he emphasized NFL+’s content will likely improve over time.

“It’s really in an early stage,” Goodell said. “I think over the years it will continue to grow. It will be an important strategy for us going forward.”

Sports Business Journal reported in May that NFL+ is expected to launch later this month.