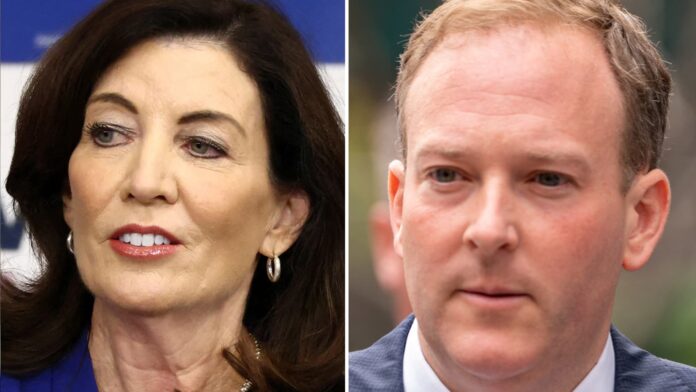 Some of New York Gov. Kathy Hochul’s top donors are privately panicking about Republican challenger Rep. Lee Zeldin’s recent surge in the polls ahead of Tuesday’s midterms, according to people familiar with the matter.

The Republican, who’s been endorsed by former President Donald Trump, has closed in on Hochul’s double-digit lead in recent weeks — prompting Hochul’s corporate backers to push her to change tactics, according to these people.

At the start of October, Hochul was ahead of Zeldin by an average of 14 points, according to data from FiveThirtyEight, which aggregates data from several polls. RealClearPolitics, which looked at several polls taken during the last half of October, showed Zeldin closing in on Hochul, who was up by an average of six percentage points. A Quinnipiac poll from mid-October showed an even smaller lead for Hochul, who was ahead of Zeldin by just four points at the time.

Many of the people who discussed these conversations with Hochul did so on the condition of anonymity so they could speak freely about the private conversations. A spokesperson for Hochul’s campaign did not return a request for comment.

Business leaders have encouraged Hochul in private meetings, including one with top real estate executives in late October in New York City, to pivot away from focusing on the impact of the Supreme Court’s decision to overturn Roe v. Wade and other social issues. They, instead, have advised her to show how she’s going to fight inflation and a recent rise in crime in the city, those familiar with the conversations explained.

Other donors have tried to convince her to fire Manhattan District Attorney Alvin Bragg, who faces blame, often by Republicans, for an increase in crime in the city, these people said. Hochul has suggested she has no plans to remove Bragg, a fellow Democrat, from office because she says he’s a duly elected lawmaker.

As Zeldin has gained steam in the polls, boosted by support from outside groups, Hochul herself has been calling on wealthy donors for additional contributions in recent weeks, some of these people said. Data from AdImpact shows that last week, Hochul and her allies spent just over $5.2 million on TV, radio and digital ads while Zeldin and groups backing him, put up $8.3 million over that same time period.

New York businessman Bernard Schwartz gave just over $69,000 last year to Hochul’s campaign for governor, according to state campaign finance records. He told CNBC that he’s concerned about Zeldin’s growing popularity, noting that others have privately encouraged Hochul to focus more on the economy. While she’s made that change, he said he’s not sure it’s enough to solidify her win.

“I am concerned,” Schwartz said when asked about Zeldin’s comeback in the polls. “She changed her strategy, but she was being advised that the voter was most concerned about the economy and less concerned about crime. I’m not so sure that that message is being projected out by the Democrats because the economy should be a stronger point for the Democrats,” he said.

While inflation rose by 0.4% in September, nonfarm payrolls grew by 261,000 last month. The unemployment rate inched up to 3.7%.

One Democratic advisor, who counts numerous Hochul donors as clients, said he’s having “PTSD” as he sees Zeldin closing in on Hochul in the polls. He compared Zeldin’s surge to Trump‘s win over Hillary Clinton in 2016.

Kathryn Wylde, the president and CEO of the New York business lobbying group Partnership for New York City, said Hochul was “too ambivalent on crime, aside from gun control” when asked for pros and cons on both competitors for governor.

The encouragement to focus more on the economy and crime as the polls tighten seems to have made an impact on Hochul’s messaging. At a private fundraiser on Wall Street last Tuesday, Hochul hit those broad topics in front of the over 100 people that attended, one attendee told CNBC. The dinner was held at Manhatta, a restaurant on the 60th floor at the  28 Liberty St. tower in the financial district, this person said. Tickets for a table to the event went up to $50,000, the attendee explained.

Another suggestion from donors to Hochul has been to fire Bragg as a way to show voters that she’s looking to take on crime within the state, some of these people said. Crime in the Big Apple climbed 5.9% year-over-year, according to an October report by the New York Police Department.

Bragg has been criticized, often by GOP officials, for the uptick in crime in New York City. Bragg, a Democrat, was elected as Manhattan’s DA in 2021 to a four-year term. He’s led an investigation into Trump’s company, Trump Org., and plans to have former chief financial officer Allen Weisselberg testify against his previous employer.

At an October debate between Hochul and Zeldin, the governor pushed back on the idea of firing Bragg and suggested that it was up to the voters to decide his fate. Zeldin said at the debate that his first initiative if he becomes governor is to remove Bragg from office.

Hochul told Zeldin at the time “you can’t throw out someone who is duly elected.”