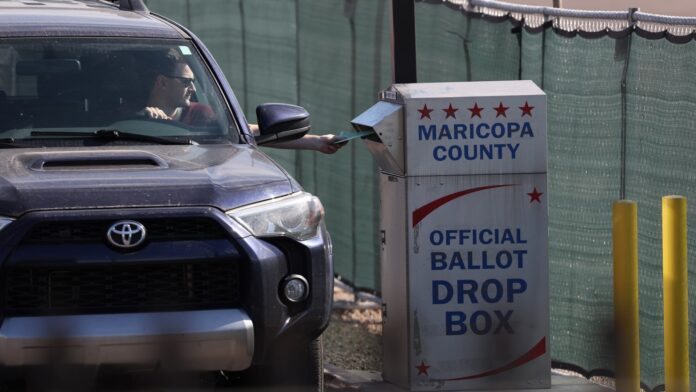 A voter drops his ballot into a drop box at the Maricopa County Tabulation and Election Center on November 07, 2022 in Phoenix, Arizona.

Officials from Arizona’s most populous county, which will help to decide some of the most closely watched midterm election races in the country on Tuesday, aimed to dispel heightened concerns about misinformation and Election Day security on Monday.

For the past two years, Maricopa County has been ramping up efforts to combat misinformation, which has especially affected the area. Following his defeat in the 2020 presidential election, former President Donald Trump falsely blamed voter fraud in several counties across the country, including Maricopa. President Joe Biden won the county by over 45,000 votes as Arizona helped to seal his electoral victory.

The following year, Republicans launched a nearly $7 million audit in the county to ensure the validity of 2020 election results. The audit found an even larger margin of victory for Biden and dispelled claims of fraud.

The county now has the country’s eyes on it as it faces increased threats to election workers, voter intimidation at drop boxes and heightened concerns about misleading information surrounding the midterms. Maricopa will help to decide control of the U.S. Senate, as Democratic Sen. Mark Kelly tries to defend his seat against Republican challenger Blake Masters in the chamber split evenly by party.

Maricopa County Sheriff Paul Penzone said the county is “committed to protect the free vote in a republic.”

“Anybody out there whose intentions are to undermine this effort, to create fear, to intimidate good men and women who are trying to facilitate this process, you will have to go through us to get there and it’s not going to happen on our watch,” he said.

Penzone who is also a member of the Committee for Safe and Secure Elections, a bipartisan election organization made up of local election officials and law enforcement, also warned elected officials to use their platforms wisely.

“Your words matter. And if you choose words that invoke violence, you will be listed on the criminal reports also,” he said. “Don’t think that your words alone cannot get you in trouble, because they can.”

As of Monday morning, the Maricopa County recorder’s office received 974,760 early voting packets and signature verified 965,000 of those, according to county Recorder Stephen Richer. Despite misinformation and disinformation, Richer is confident that his office has built trust among voters.

“It is the goal of the county, after having done this for two years, that because of the positive information that we have put out and because of our continued insistence on addressing these claims and finding that not one has been accurate, that people will have confidence in this process,” he said.

Gates also remarked that the increased interest in Maricopa County’s election is an indication of the state of democracy in the county and in the country as a whole.

“This really is not about us. This is about what is going on generally,” Gates said. “The fact that we have not only reporters here from the U.S. but from around the world, people who have concerns about our democratic republic, about what has happened to our elections.”