HomeUSAPayrolls surged by 261,000 in October, better than expected
USA

Payrolls surged by 261,000 in October, better than expected 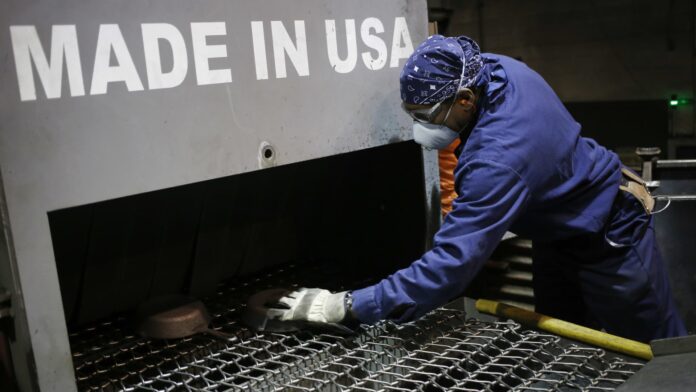 Job growth was stronger than expected in October despite Federal Reserve interest rate increases aimed at slowing what is still a strong labor market.

Although the number was better than expected, it still marked the slowest pace of job gains since December 2020.

Average hourly earnings grew 4.7% from a year ago and 0.4% for the month, indicating that wage growth is still likely to serve as a price pressure as worker pay is still well short of the rate of inflation. The yearly growth met expectations while the monthly gain was slightly ahead of the 0.3% estimate.

Leisure and hospitality also posted solid growth, up 35,000 jobs, though the pace of increases has slowed considerably from the gains posted in 2021. The group, which includes hotel, restaurant and bar jobs along with related sectors, is averaging gains of 78,000 a month this year, compared with 196,000 last year.

Heading into the holiday shopping season, retail posted only a modest gain of 7,200 jobs. Wholesale trade added 15,000, while transportation and warehousing was up 8,000.

“Job gains were fairly widespread, and overall wage gains are still too high,” said Marvin Loh, senior global market strategist at State Street. “So, steady as she goes from a Fed perspective, but incrementally, there’s reason to have a little hope that we’re starting to see some of the froth come out of the [jobs] market.”

The unemployment rate rose 0.2 percentage point even though the labor force participation rate declined by one-tenth of a point to 62.2%. An alternative measure of unemployment, which includes discouraged workers and those holding part-time jobs for economic reasons, also edged higher to 6.8%.

The new figures come as the Fed is on a campaign to bring down inflation running at an annual rate of 8.2%, according to one government gauge. Earlier this week, the central bank approved its fourth consecutive 0.75 percentage point interest rate increase, taking benchmark borrowing rates to a range of 3.75%-4%.

Those hikes are aimed in part at cooling a labor market where there are still nearly two jobs for every available unemployed worker. Even with the reduced pace, job growth has been well ahead of its pre-pandemic level, in which monthly payroll growth averaged 164,000 in 2019.

“This thing doesn’t fall of a cliff. It’s a grind into a slower backdrop,” he said. “It works this way every time. So the fact that people want to hang their hat on this lagging indicator to determine where we are going is sort of laughable.”

Indeed, there have been signs of cracks lately.

Amazon on Thursday said it is pausing hiring for roles in its corporate workforce, an announcement that came after the online retail behemoth said it was halting new hires for its corporate retail jobs.

Also, Apple said it will be freezing new hires except for research and development. Ride-hailing company Lyft reported it will be slicing 13% of its workforce, while online payments company Stripe said it is cutting 14% of its workers.

Fed Chairman Jerome Powell on Wednesday characterized the labor market as “overheated” and said the current pace of wage gains is “well above” what would be consistent with the central bank’s 2% inflation target.

“Demand is still strong,” said Amy Glaser, senior vice president of business operations at Adecco, a staffing and recruiting firm. “Everyone is anticipating at some point that we’ll start to see a shift in demand. But so far we’re continuing to see the labor market defying the law of supply and demand.”

Glaser said demand is especially strong in warehousing, retail and hospitality, the sector hardest hit by the Covid pandemic.