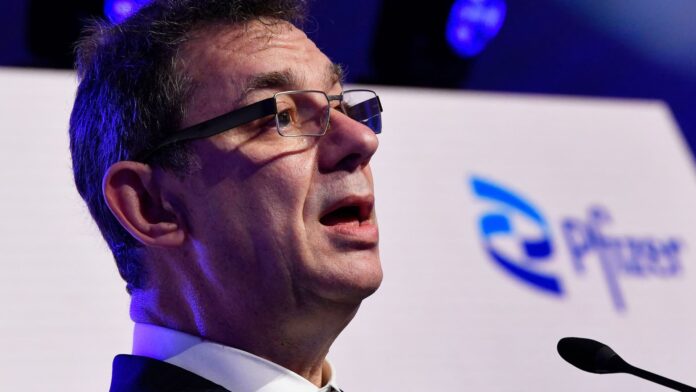 Pfizer CEO Albert Bourla talks during a press conference with European Commission President after a visit to oversee the production of the Pfizer-BioNtech Covid-19 vaccine at the factory of US pharmaceutical company Pfizer, in Puurs, on April 23, 2021.

Pfizer CEO Albert Bourla laid out his plan Tuesday to keep the pharmaceutical giant growing through 2030, as the Covid-19 pandemic fades and the company faces generic competition for some of its blockbuster drugs.

Bourla said Pfizer is staring down an expected loss of between $16 billion and $18 billion in revenue from 2025 through 2030 as patent protections for some of its bestselling drugs expire. He acknowledged that some investors are skeptical of Pfizer’s future following two blockbuster years thanks to its Covid vaccine and antiviral treatment.

“We recognize that some are questioning Pfizer’s longer-term growth prospects,” Bourla told analysts during Pfizer’s third-quarter earnings call Tuesday. The company’s shares rose by about 3% Tuesday after it raised its 2022 earnings guidance in its third-quarter earnings report that beat Wall Street expectations. “We believe we not only can overcome these expected declines, but also can potentially generate strong growth through the end of the decade,” he said.

In a July report, Moody’s singled out five Pfizer medications that could come under pressure from generics over the next decade. They include Eliquis to treat blood clots, Vyndaqel for cardiomyopathy, Xeljanz for rheumatoid arthritis, Ibrance for breast cancer and Xtandi for prostate cancer.

Taken together, these five drugs represented about 40% of Pfizer’s third-quarter revenue this year when the Covid vaccine and the antiviral treatment Paxlovid are excluded.

It’s also unclear how strong demand will be for the Covid vaccine and Paxlovid as the world, hopefully, transitions out of the pandemic. In the third quarter of this year, the vaccine and the antiviral treatment represented 52% of Pfizer’s total revenues.

Bourla told analysts that Pfizer plans to add $25 billion to the company’s revenues by 2030 through recent acquisitions as well as the development of its in-house drug and vaccine pipeline. He highlighted three areas of focus — respiratory syncytial virus, migraines, and ulcerative colitis.

Pfizer’s RSV vaccine candidates for older adults and infants have the potential to generate billions in revenue, Bourla said. Its vaccine for people ages 60 and older was 85% effective at preventing severe lower respiratory tract infections. And its vaccine for infants, which is administered to mothers late in their pregnancy, was 81% effective at preventing severe disease in the first 90 days of the baby’s life.

Bourla said the vaccine to protect newborns could enter the market by late 2023 or early 2024. It would be the only RSV vaccine in the U.S. that protects infants by giving the shot to the mother, he said. The RSV vaccine for older adults could also enter the market in the same timeframe, according to Bourla.

“RSV is an area of significant unmet need, particularly in older adults and infants,” he said. “We believe we have the potential to be a leader in the space and have a real impact on public health.”

Pfizer is also planning to build out the world’s best portfolio of migraine medications through its recent acquisition of Biohaven Pharmaceuticals, Bourla said. Its migraine medication portfolio could reach peak revenue of more than $6 billion, he said. More than 40 million people suffer from migraines in the U.S. alone.

Pfizer’s purchase of Arena Pharmaceuticals and its drug candidate for ulcerative colitis could also generates billions in revenue, Bourla said. Ulcerative colitis is a debilitating inflammatory bowel disease that affects one million people in the U.S.

There’s a high demand for treatments and Pfizer expects the market to grow by 50% over the next five years, Bourla said. The medication, etrasimod, could enter the U.S. market in the second half of 2023 pending regulatory approval, Bourla said.

Pfizer bought four companies this year alone for a combined total of more than $24 billion. The medications these acquisitions bring with them should move Pfizer about one-third the way toward its 2030 revenue goal, Bourla said.

Pfizer also has 15 drugs and vaccines developed in-house that are expected to roll out over next 18 months. They have the potential to generate $20 billion in 2030 sales, according to Bourla.

“This is going to be somewhat like a sustained flu but actually more deadly than the flu,” Denton said on the earnings call. “So therefore, I think the products both from a vaccine and a therapy perspective that Pfizer has developed can be quite relevant for many years to come.”