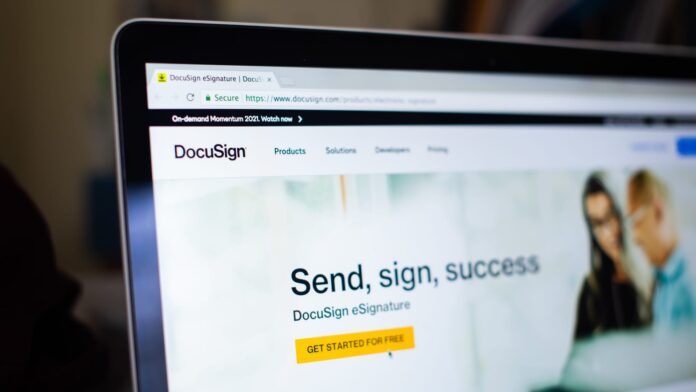 It’s time to sell DocuSign , according to Piper Sandler. The firm on Wednesday downgraded shares of the company to underweight from neutral and lowered its price target to $54 from $65. “We believe the risk profile remains elevated amid the CEO transition, consistent execution challenges, rapid employee turnover and deteriorating macro environment,” analyst Rob Owens wrote. “All of these factors contribute to a challenging backdrop for potential revenue reacceleration in the near-term, in our view.” DocuSign’s previous CEO, Dan Springer, resigned in June following weak earnings. An interim CEO is currently leading the company while it searches for a replacement. “While we believe a leadership change is likely necessary to achieve the balanced, longer-term growth and profitability profile, we also believe this adds further to execution risk over the next few quarters at least,” wrote Owens. “Although expectations were meaningfully reset coming into the year, another billings guide down in 1Q shows that visibility remains cloudy, especially with a worsening macro and sales rep turnover.” In addition, the softness the company is seeing isn’t being equally felt by its competitors, according to the note. On a recent earnings call, Adobe noted continued demand for its own signing feature and said that Adobe Document Cloud is the fastest growing portion of the business. This also makes a takeover of the company less likely, according to Piper Sandler. “In our view, upside potential lies primarily with the company being acquired, but with many other attractive acquisition targets in the current market, we don’t believe investors should hold out for this possibility,” Owens wrote. Shares of DocuSign have shed more than 56% year to date through Wednesday’s close. —CNBC’s Michael Bloom contributed to this report.

VA will now provide abortions in cases of rape, incest or medical danger